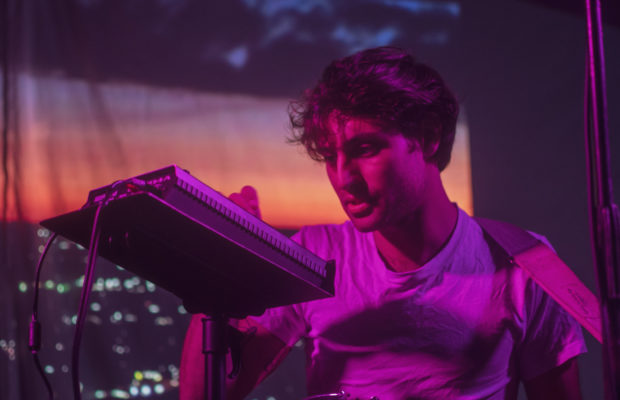 It’s around 9pm when New York’s York Lore, the brainchild of Adrian Galvin graces the stage at Houston, Texas White Oak Music Hall. Here to support his latest EP Absolutes takes stage with lots of energy playing the EP’s opening track “Fake You”. The young indie artist gives one of the most visually stunning performances I’ve ever witnessed. Galvin and his drummer performer in front a backdrop projecting beautiful video footage that perfectly blend with his peaceful music, it’s quite an experience.

There’s a handful of people in the crowd, but Yoke Lore presents feels the room in a way doesn’t feel empty, it’s magical really. There are two teen girls in crowd singing every word with their heart, for those who didn’t know the words Yoke Lore nicely had booklets with the lyrics printed out, so there was no excuse for you to sing along. And for those who didn’t look at the booklet he covered Savage Garden’s “Truly, Madly, Deeply” a song that we should all know and have memorized by heart (I’m not joking).

Yoke Lore not only puts on a visually stunning performance, but a very romantic one. Moments where he performed songs like “Concrete” or the yet to be recorded “Tim Robbins” felt very personal with Galvin taking time to talk to the audience about his inspirations. It almost felt like your high school crush speaking to you. Well, at least my high school crushes (To All The Art Boys I Loved Before I Knew Better). Yoke Lore is an artist that is hard to ignore and not be dazzled by. If not by his wonderful lyrics and melodies then by his stunning visuals or just delightful charm.