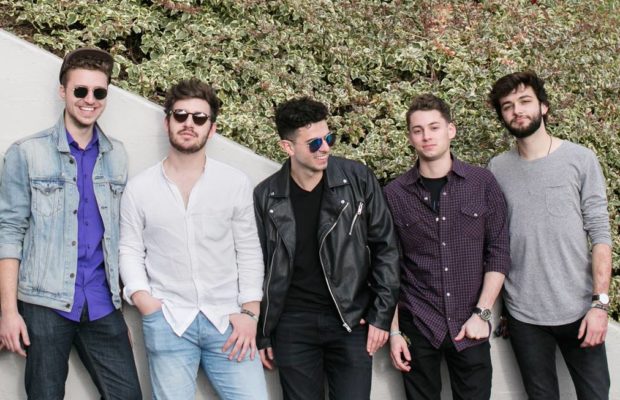 New York indie-pop band HARE are ready for a fresh start to their musical career.  Formerly called Seb Isaac Band, singer/guitarist Sebastien Isaac, guitarist James Licata, bassist Graham Orbe, Keyboardist Jon Caplan and drummer Michael Santa Cruz decided to change the band name to HARE and released their first single “Rolls Along” soon after.  With a sound that includes jazz and pop influences, their music is described as a blend of alternative, acoustic driven rock. With “Rolls Along”, as well as their single “It Feels Good”, receiving plenty of critical praise, the band has a nice momentum leading up to their EP release show.  If you live in the New York area, you can attend the show at The Knitting Factory on June the 2nd.   Our staff writer, Emily May, chatted recently with front man Sebastien Isaac via email.  You can keep up-to-date with the band and upcoming tour news on their website here, Facebook here, Instagram here and Twitter here.  You can stream their singles on Soundcloud here.  Check out the lyric video for “Rolls Along” below!

EM: You were formerly known as Seb Isaac Band, until you met your current band mates Jonathan Caplan, James Licata, Graham Orbe and Michael Santa Cruz and changed the band’s name to HARE. What do you think it was about these guys that caused you to “click” so instantaneously and how do you feel that your music has changed and evolved since you all started playing together?

SI: We’ve actually all been playing together under Seb Isaac Band as well. The name change was a gradual thing, it just felt right. We all started playing together almost three years ago and we haven’t stopped clicking since. Individually, they are all phenomenal musicians and the sound we make together is different from anything I or each of us individually can produce on our own.

EM: You had your first show as HARE in NYC in mid-March. How has the response been so far?

SI: Amazing actually. I have not met one person that didn’t love the name change. I think the only semi critical response we’ve heard was something like, “Wait why would you guys change your name now?” But I don’t even consider that to be criticism, just confusion, so we’re not too worried about it. Like I said, it felt right to us and I think that kind of showed when we announced the name, so it’s just been nothing but love since.

SI: This EP has been 3 years in the making for me. Before we all met and started playing together I was perusing these songs as a solo project. I worked real close with my buddy James Mehrkens on producing these songs, but even that didn’t really take up much of the time spent getting this together. This EP was expected to release January of 2016 but thank god it didn’t. It was not ready, and I didn’t know what sounded good. I was right out of college and just so excited to release something that I completely looked past the quality of what I was about to put out. Eventually someone told me that once your art is out there that’s it. I guess I really took a look at the music and where I was at as an artist and changed my mind. It wasn’t ready, so I worked with multiple musicians, engineers, producers, and mixers to find out what these songs needed. In the process I met the band and started working on the live sound which really influenced what we did with the song recordings. We went in and re-recorded all the old, lower quality tracks and really give it the sound it needed. This was a real learning curve.

As for the songwriting process, it’s always changing. It started out with just me writing songs with just a guitar, a loop pedal and my voice, but now things are getting a lot more collaborative. It’s a new process for me but I think it’s going to pay off. A lot of the new songs we’re coming up with are sounding insane.

EM: I read that you honed your songwriting skills in college and then returned to New Jersey and began playing at open mic nights in the tri-state area. What caused you to put your passion for music on the back burner and what led to your decision to pursue it once again? What led you to want to break into the New York music scene? What do you love about the NYC music scene and how does it inspire you as a musician?

SI: Music was always my passion, but I guess with the way I grew up and the environment I was in, it didn’t seem possible for me to write and play my own music successfully. When I was young I did a bunch of music programs both in and out of school and while my love for music was pretty well nurtured and always growing, singing and being a front man seemed so far out of reach. I was listening to rock bands with crazy talented lead singers with vocals that were so high, unique, and badass. Like there was no shot I was pulling of anything close to what Robert Plant was doing, you know? It just seemed like an impossible thing, so I stuck with guitar and wanted to see if I could maybe find happiness working in the music business or anything related to music. I just loved music that much that I figured if I’m not meant for the stage maybe I can work behind the scenes. While I was in college however I got a chance to work for a company that manages big artists. I hated it. But the only reason I hated it was because the more I worked for these artists, helping them out with their day to day, the more I realized there was nothing really that special about them and that I could do exactly what they do and maybe even better. It was a really life changing moment for me because it was the moment that music became an option for me again.

As for NYC…I think it has one of the best music scenes in my opinion. It’s so easy to just go see or even play a show, which is great for up and coming artists. We tried booking a show in LA while we were out there to record the music video and it was basically impossible. Luckily we found a great place called AMPLYFi in Hollywood that let us have a show, but my point is that in New York it’s no big deal booking a show. You may have to pay your dues and prove to the venue that you can get a solid headcount before they give you the main stage but that’s understandable.

EM: I read that you did an open mic night a couple of weeks ago and mentioned wanting to start doing them more often. What is it that you love about that style of performance?

SI: I just loved the feeling of showcasing something new to a crowd just trying and share their art. I forgot what it was like. I used to hate them because of the waiting list and short amount of time you got to showcase your stuff, but after only playing gigs in NYC it was so refreshing to just show up, hang around, wait for your name to be called, and play. No judgement and no need to sell yourself; just a window for you to try something new for a fresh pair of ears.

EM: You guys recently filmed your first music video! What was that experience like and what the inspiration behind the idea for the video? It looks like it was a lot of fun to make!

SI: It was such an amazing experience. I have to give a shout out to my buddy and the director Sean Stanton for putting this together for us. We met about a year and a half ago and clicked. Just a right place at the right time kind of thing. I called him up just to check in on him and what he’d been up to and and the idea of a music video for or single “Rolls Along” and he was more excited than I was about the idea and really convinced me to execute. He convinced us to fly out and film it in LA where he had more resources so we did and it was such a blast. Be on the look out for it in early June!

EM: Who are you guys listening to right now that you feel people need to hear? Any new/up and coming bands?

SI: Mike Santa Cruz got me into King Gizard and the Lizard Wizard. I’m real iffy with prog rock but he convinced me to give them a shot and it’s unreal. James Licata and the movie “Call Me By Your Name” got me back into Sufjan Stevens. As for up and coming bands, Jon Caplan is in another group called “Wishbone” which is now my new favorite band. They just came out with an EP recently and it’s unreal. Oh, also we’ve really been digging our buddy Kevin Kendrick’s project “A Big Yes and a small no.” His new album “Mise En Abyme” is amazing. Mike actually directed the music video for one of the singles on the album and James and Graham sit in with the band from show to show. Definitely give them a listen. Aside from that I’m always listening to Tame Impala and whatever my Spotify Discovery Playlist is giving me.

EM: HARE’s first single, Rolls Along, was recently released! What can you tell me about the song? I read that it’s had over 1,000 streams on Spotify. How does it feel to have such a great response to the song in such a short amount of time?

SI: It’s unreal to be honest. We’re now at over 2,500 streams at this point and it’s so nice to know people are listening. We gotta start somewhere and for our first ever single this feels like a great start. But all streams aside, it’s just a dream to know people are listening. These songs have taken a while to come to life and it’s so surreal to finally put it out there to start a life of it’s own.

EM: Your EP release party is on June 2nd at The Knitting Factory in NYC. What are you looking forward to the most with the show and what can your fans expect?

SI: We’re pulling out the big guns for this one. We always give it our all on the stage but this is our first time playing a set that’s over an hour. It’s also the first time we’ll be playing with a horn section! We’re also working on a visual aspect for the show that we’re insanely psyched to showcase. I can’t express how excited I am. This show has been 3 years in the making for me so there’s no way it’s not going to be a banger.

SI: Music. Music. Music. Just more music. We have new tunes and we’re ready to record them. Also more shows…cause we love playing. But that will never change.