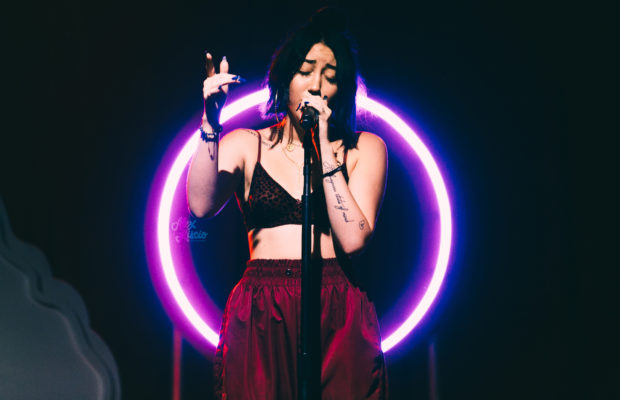 Words and Photos by Alex Liscio

Upon arriving to the venue, I noticed that parking was not as hectic as usual, and nearly everyone was already inside. I was surprised to see that the show did not sell out, and that the line was as short as it was at only 30 minutes until show time. While the venue wasn’t as packed as I’ve seen it at previous shows, the audience acted like a sold-out crowd, making enough noise for outsiders to believe it was a full house.

The stage was dressed in moody lighting and wooden props that resembled clouds. Maty Noyes, one of Noah’s close friends, opened the show with infectious energy and a colorful performance. Even her outfit was a rainbow. She performed crowd favorites like “Say It To My Face” and “Spiraling Down,” which got fans moving like crazy. She owned the stage, strutting back and forth, jumping, and getting low to interact with fans. Noah could not have a better opener out on the road with her right now, seeing that fans knew the words to every song. Before performing “Porn Star,” she explained that “not only is it my favorite, it’s Noah’s favorite,” adding “[it’s] such a joy being on tour with a friend.” The crowd cheered in anticipation of what Noyes had in store for the rest of her set. Before performing “Lava Lamps,” she asked the crowd to go crazy. “When this chorus hits, you’re gonna wanna lose it,” she assured. Before wrapping up her set, Noyes touched on her closing song. “This song started my career and it’s very special to me, so I wanted to end with it.” After performing “Stay,” a collaboration with Kygo, she told fans she would be at merch to meet everyone until Noah went on stage. “I love you Florida,” were her closing words as she exited the stage.

Music played through the venue, the lights returned to normal, and the crowd began to chant “Noah, Noah, Noah!” They were exceptionally eager for her to take the stage, and more fans made their way to the floor to claim their spots.

As time got closer to Noah’s set time, fans grew excited and the energy in the room skyrocketed. At 9 p.m., the lights went dark, her intro began, and her family emerged from backstage to watch the show on the sidelines. Fans screamed at the sight of Tish Cyrus, and screamed even louder when Noah took the stage. With a smile on her face, the intro faded into “Where Have You Been?” After performing “Good Cry” and “My Way,” Noah prepared fans for a cover, saying “I know you’ll all know this one,” before performing her rendition of M.I.A.’s “Paper Planes.” Her setlist consisted of a great variety of her hits, and a cover of Hozier’s “Take Me To Church” in her acoustic performances. She gave the audience a choice of “Almost Famous” or “Team,” and they chose “Team.” Throughout the night, Noah nailed every note and sounded flawless. She put on an incredible upbeat performance and interacted with her diehard fans that inhabited the venue. After performing four acoustic tracks, she paid tribute to XXXTentacion, which included “SAD!” “Again,” and “Look At Me.” She asked the crowd to put their X’s up and they all celebrated his life for a moment before continuing the show. I don’t want to spoil the entire set for those that have yet to attend, but she played everything that her fans wanted to hear. The venue should have been a lot fuller than it was, and those that skipped out missed a great show. She concluded her set with her first hit “Make Me (Cry),” which was a great note to end on. Everyone in the room had a smile on their face as the night came to an end, including Noah. If I could attend this tour again, I 100% would, and I recommend that everyone makes it out to a show near them.