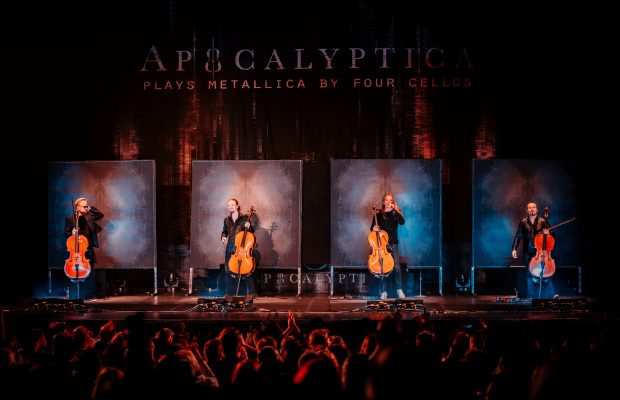 Apocalyptica brought their highly anticipated “Apocalyptica Plays Metallica By 4 Cellos” tour to the Ohio Theater in Cleveland on Sunday.

In 1996 Finnish Rockers, Apocalyptica, released their debut “Plays Metallica By 4 Cellos”.  To celebrate the 20th Anniversary of the album, the group re-released the album in 2016 and added 3 bonus tracks. They also brought the show on the road and I was lucky enough to catch their performance.

On Sunday they played an amazing two-set concert in front of an excited audience. Before the intermission the crowd sat in their seats, humming the lyrics to their favorite Metallica tracks. Eicca Toppinen said, “we just play the music, today you are the voices”. Clevelanders did not disappoint and when I looked around the room, I saw that most people were lending their voices to complement the music on stage.

Toppinen also mentioned that tonight was a special night because earlier in the day Finland won the ice hockey championship, so naturally everyone in the band was excited to be celebrating.

After the intermission, the band told the audience to get out of their seats and come up in front of the stage and people happily obliged, rocking along with the band, who were mostly standing up now as well, for the rest of the evening.

After an encore, the band left the audience wanting more and we all can’t wait until Apocalyptica make their way back to Cleveland again.

Set1:
Enter Sandman
Master of Puppets
Harvester of Sorrow
The Unforgiven
Sad but True
Creeping Death
Wherever I May Roam
Welcome Home (Sanitarium)

Set2:
Fade To Black
For Whom The Bells Tolls
Fight Fire With Fire
Until It Sleeps
Orion
Escape
Battery
Seek And Destroy

Encore:
Nothing Else Matters
One