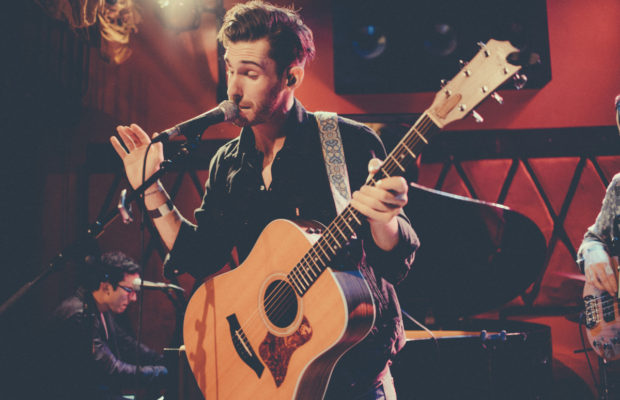 It’s late on a Friday night when I head out to Rockwood Music Hall in the Lower East Side of Manhattan, to catch California alt-rock group The Brevet. I got to speak with the lads of The Brevet the day before the show, and these guys passion for music made me super pumped to go check out their set. Once I get in the venue, and find my spot towards the front of the stage, I notice the guys prepping to take the stage. As lead singer, Aric Damm, and bassist, Ben Ross, are setting up for their instruments, a large piano is being lowered down from the ceiling to the stage. Keyboardist, Mike Jones, looks so excited while standing side stage, watching his instrument for the evening reach the stage. The room is packed, and a good portion of the people in the room are long time fans of the band. After a few minutes of preparation, the lads of The Brevet finally take the stage. Joining Damm, Ross & Jones on stage are guitarist, John Kingsley, and drummer, David Aguiar. Damm walks up to the microphone and thanks the crowd for being at the show. The smile on his face is electric, and his joy to be performing in New York City radiates off of him and onto the crowd. They play almost an hour long set, and it’s full of energy and charisma you don’t see very often in newer bands playing tiny venues in cities they don’t come from. Throughout their set two girls in the front are dancing as if their lives depended on it, and the band are loving their enthusiasm. While I didn’t know much about The Brevet before interviewing them, I now would definitely call myself a fan. Their music is catchy and danceable, and Damm‘s voice in enchanting, and when you add to that the harmonies the rest of the band put into the songs, you have some really incredible music. If you get the chance, you really should check out The Brevet when they come to your town, they’re a band you really don’t want to miss.