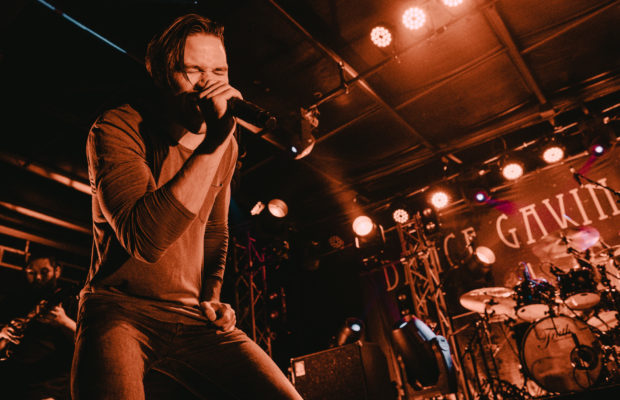 Dance Gavin Dance with DON BROCO, Hail The Sun, Covet, and Thousand Below

Dance Gavin Dance, DON BROCO, Hail the Sun, Covet and Thousand Below rounded out the ticket for a night of good music at St. Louis’ Pop’s Nightclub.

While the flooding in St. Louis due to the mass amounts of rain fall since mid April created insane amounts of traffic, I was unfortunately only able to catch DON BROCO and Dance Gavin Dance’s sets. But judging by the energy in the room when I arrived and the already sweaty crowd, it was evident that the night was off to a great start with help from the opening bands.

As merch lines for the opening bands dissipated, the British gents of DON BROCO took to the stage to soundcheck their gear, all while being egged on by the crowd to get the show on the road. Their 45 minute set had the crowd jumping around, screaming their hearts out, and even swinging their own t-shirts over their heads to the band’s hit song “T-Shirt.”

Before leaving the stage, the British rockers proclaimed that this gig with DGD was the biggest they’d played in “these here parts” and thanked everyone for showing them the amount of love they did while they played hits like “Come Out to LA” and “Pretty.”

Dance Gavin Dance hit the stage around 10 PM, but there were no signs of wavering energy yet. Fans were sent into a frenzy as the band opened with “Son of a Robot”, but there was no song that the crowd enjoyed more than “Uneasy Hearts Weigh the Most.”

Tillian Pearson’s smooth vocal tone is always sure to leave goosebumps on your skin as they mix with Jon Mess’ heavier vocals. In perfect harmony, the band rocked together for just under 90 minutes and finished off with “Evaporate.”

While the Artificial Selection Tour has since come to a close, if either DON BROCO or Dance Gavin Dance rolls through your city anytime soon, make sure to set the night aside to enjoy some kickass live music.