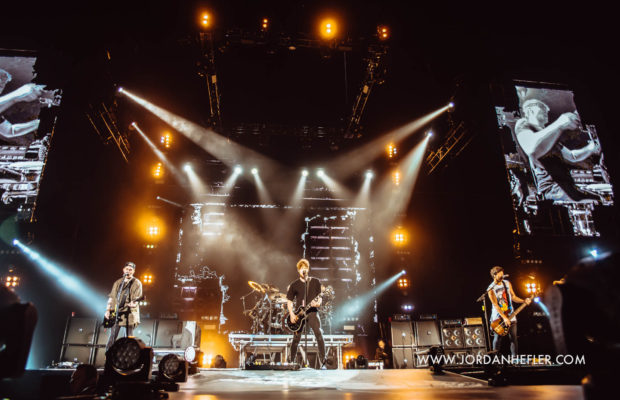 Last Friday the Pop Punk sensation 5 Seconds of Summer packed out the Smoothie King Center with a crowd of screaming fans. The Australian boy-band is noted to be influenced by bands such as All Time Low, Mayday Parade, and Boys Like Girls, and have also been associated as an opening act with even bigger bands such as One Direction. The arena was filled with hysterical fans (predominantly young girls and their mothers) and the quartet delivered a heartfelt, energetic performance to incite blood-curdling screams from every corner. Although the band has been on tour since February, the members acted genuinely astonished and humble about performing to the crowd in New Orleans, even cracking jokes about the city’s iconic food (beignets and gumbo). Their Facebook page also boasted a custom tour poster design for the New Orleans date, illustrating a bottle of “She’s Kinda Hot Sauce” as a visual play on their popular song “She’s Kinda Hot” which was even one of the first songs they played at the show. The band has an authentic sense of humor, and it can be seen in their interactions with each other and the audience on stage. Their witty banter was genuine to what you would expect from guys their age in a world-famous rock band: Curse words slipped here and there as mothers and little girls everywhere giggled nervously, but remained smitten from their unfaltering charm. The Sounds Good, Feels Good tour has finished their North American leg and will be moving on to Mexico this week.

Photos and Review by Jordan Hefler