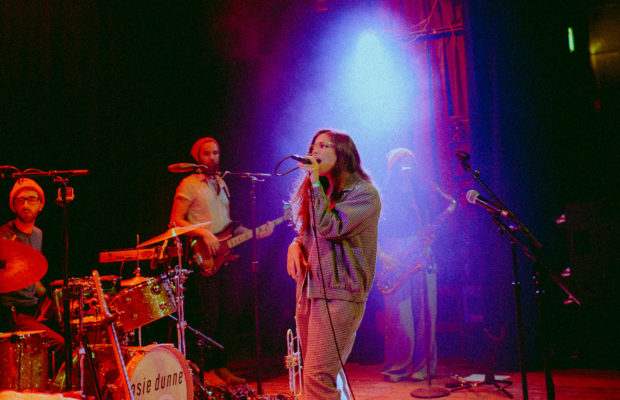 At age 21, most people fall into a few categories – full time student, full time employee, or a little of both. What not a lot of people fall into is being a signed, touring, phenomenal musician. This is where Miss Josie Dunne comes into play. On August 12, the pop singer and more-than-likely soon-to-be star performed a sold out hometown show at Lincoln Hall in Chicago.

Those who have experience Lincoln Hall know that it is small and cool, a warm bar out front and then an intimate back room for shows, holding about 500 people. The Hall holds a lot of sold-out performances, but never with an audience as diverse as Miss Dunne’s.

Walking into the room on a Sunday night in August, one would expect to find a vast majority of twenty and thirty-somethings, hipsters and cool people draping the room, drinks in hand, leaning on the brick walls. Instead, for Dunne’s performance, it seemed like a little bit of every piece of Chicago turned out. The front row was draped with children and teenagers ranging from about age seven to age fifteen, and every single one of them was in awe the entire night. Looking throughout the rest of the room, there were mothers and daughters and fathers and sons, college-aged guys and girls, grandparents, and everything in between. The most interesting part of this, however, was how consumed everyone in the room was during Dunne’s set.

Seeing the crowd, one would assume Dunne makes some sort of bubblegum pop that is catchy enough to be played on Radio Disney but also B96. This is in some ways true, but in some ways, extremely far-off. When the lights went out and Dunne strolled onstage in a gingham pant and jacket set, the last thing I expected was the soul music she brought with her. Her most recent release To Be The Little Fish was performed in full, and it was more than anyone could have expected. Singing with a bluesy undertone about heartbreak and growing up and everything in between, and the ponderings of a young woman in 2018, Dunne had the whole room captivated. She brought her drummer, and a saxophonist, and someone on the keys, and between the three and herself, the music was bopping and moving the crowd all night.

While the crowd was focused on Dunne, however, she was focused more on them than anything else. She even made homemade tee-shirts, each one custom in color and design, and tossed them out into the crowd for her last few songs, a thank you to those who took their time to come see her perform.

Needless to say, the performance was incredible from beginning to end, and unique in both sound and spirit. Needless to say, Miss Josie Dunne’s EP might be called To Be A Little Fish, but she is the farthest thing from one. She made not just a splash, but waves, at her performance, and will more than likely continue to do so as time goes by.