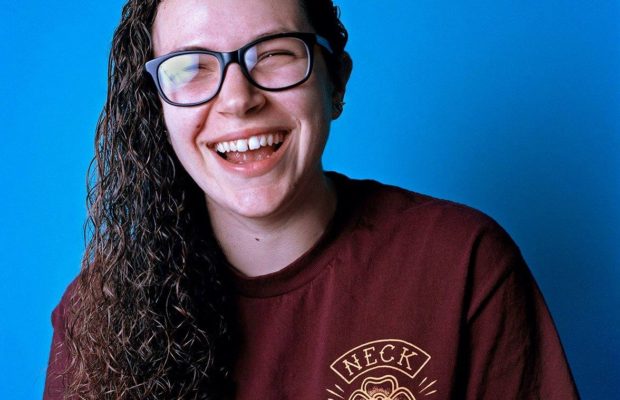 Based in New York and Philadelphia, Jess Williams is a Stitched Sound writer and photographer that sets the bar high. With incredible skills behind the camera that has allowed her to capture beautiful photographs of bands such as The 1975, Panic! At The Disco, Beartooth, and more, Jess also has an impeccable way with words, contributing live reviews, album reviews, and interviews for Stitched Sound. With her strong and eager spirit to try anything and everything in the world of music journalism, her lovable personality and positivity are just a few things she brings to the Stitched Sound team. So, everyone, meet Jess Williams, the biggest twenty one pilots fan you will ever meet and our December Staff Member of the Month!

When did you join Stitched Sound?

I joined Stitched Sound in March of 2016. It feels like I’ve been a part of the team for a lot longer than that though.

When did you start getting into photography and journalism?

There’s two separate answers to that question. I started first in photography in 2010, the summer before my freshman year of high school. I got my first digital camera, it was a little Kodak point and shoot and it got the job done. I realized that I really liked taking pictures and that I had a knack for it, so I started to further pursue it. I never took photo classes at my high school, I was more of the drawer/painter/studio art kid in high school. However, I started taking these weekend classes at an art school back home in Philadelphia called Moore College of Art and Design, and that’s where I really learned the core of what I know about photography.

Where journalism is concerned, I’m not as experienced, and I guess some would consider me still a “newcomer” to the field. I always knew I wanted to be a writer. I thought I was going to do that before I dabbled with photography. I wanted to be a poet, but I got frustrated because I wasn’t eloquent enough for that. So when I entered my program in college three years ago, I was able to study both art and liberal arts, so I picked journalism. I found myself always writing articles that had to do with music in some form and that led me to working at Stitched Sound!

What are you currently going to school for and why did you pick the major you are in?

I go to The New School in New York City and they have a special program for kids like me, who can’t really decide on a singular topic to study, so they let you study two topics at once. I go to art school for Photography and I go to a liberal arts college for a program called Journalism and Design. The program is essentially learning the basics of journalism, but focusing more on the visual aspects of it, using video, photo, data and infographics to convey a story rather than just plain old text.

What has been your favorite show to photograph so far and what made it so memorable?

I’d have to say that the best show, and my favorite show, that I’ve gotten to photograph so far would be twenty one pilots at Madison Square Garden this past summer. What made it so memorable is that, for one, twenty one pilots have been and always will be my absolute favorite band. I’ve been following them for years now and I’ve seen them ten times (and counting!). That show at MSG was the first time that I got to photograph after many failed efforts. Another thing that made it so memorable was that it was at Madison Square Garden which is such a monumental and historical venue. Just three months prior to that show I had shot my very first arena show and I was now shooting a show at Madison Square Garden. The entire show and venue combination made it probably the most memorable experience of my life, so far.

Is there are particular photo in your portfolio you are especially proud of? Which is it and why is it one of your favorites?

I actually have two photos that are both my favorites and I can never seem to pick one that I like better. The first photo is of Tyler Joseph from twenty one pilots (see above), that night at MSG. I can recount the exact moment that it happened. It was during their second song, which was “Migraine” (one of my favorite tracks off of Vessel) and he ran over to my side of the stage and began rapping the second verse while grabbing at his mask and that’s the moment I snapped the photo. It captures a moment of tranquility amidst so much chaos and that’s what really drew me to that photo.

My other favorite photo is of Matty Healy from The 1975. They’re such a fun band to shoot and their stage setup begs for wide angle shots because it’s just unreal how amazing their setup is. Amidst all of the crazy nerves and excitement because I was shooting a bucket list band, I was able to snap this shot of Matty during “Love Me”. I like the photo because it’s a close up, and I feel like that’s rare for The 1975. I also feel like it really captures the idea of an emotive on-stage portrait. I think the expression really encapsulates what a live performance by The 1975 is like: bright, colorful and total fun.

In your opinion, what makes for a good live shot?

The kind of live shot that I gear towards more is onstage portraiture. While I admire and appreciate the wide angle shots that have the full band in it, it’s just not really my style. An image that proves the photographers individuality is what makes a good live shot, to me. There’s a ton of photographers out there and in the photo pits, and we can all capture the same moment, but it’s how you capture the moment that makes it stand out. Getting up close and personal with the musician and capturing a more vulnerable side of them or capturing them in the heat of the moment when the passion is coming through in their expression. To me, that’s what makes a live photo really stand out.

Have you become a fan of any band(s) after reviewing/photographing them? Who and why?

Generally, I like to review bands that I like already or I’ve heard once or twice. However, I occasionally take on reviews for bands that I’ve never heard of before, in an effort to explore new bands and new genres of music. Just recently I reviewed the debut EP for this Brooklyn singer/songwriter called pronoun and I became a really big fan of her’s after listening to that. I also did some further listening to Sleep On It after reviewing their EP as well as Heyrocco after writing a review of their most recent album. It’s the best feeling when you go out on a limb and review something that you’ve never heard before and then you end up liking it.

Who is your dream artist to interview and why? What would be some questions you would like to ask them?

I’ve spoken so much about twenty one pilots, but they are my biggest inspiration in every facet of life. From music to school to just being a functioning human being, honestly. Their music and their message motivates me every day and even when I’m in the darkest of places.

Some questions that I would ask (I have to step up my interview game) would be:

What is the biggest inspiration to you as song writers?

What role has your fan base played in your musical careers so far?

What are your top five favorite albums?

Of all time? That’s a real tough decision.

If it’s allowed, I’d like to throw in a bonus top album which would be the Jonas Brothers self-titled album. It’s a musical masterpiece.

If you could only listen to one artist forever, who would it be and why?

I’d have to say twenty one pilots (shocker, I know). I feel like their music is so diverse. Throughout any single album, the listener goes through so many emotions. For example, “heavydirtysoul” is what I listen to to get pumped up, “Doubt” is track with a slower pace and the listener becomes more pensive and then you’re just thrown into “Goner”, which messes with the listeners emotions on a whole new level. I don’t think I could ever get sick of listening to twenty one pilots. Their music, their lyricism, Tyler’s voice, it’s all just a gathering of the best sounds in the world, if you ask me.