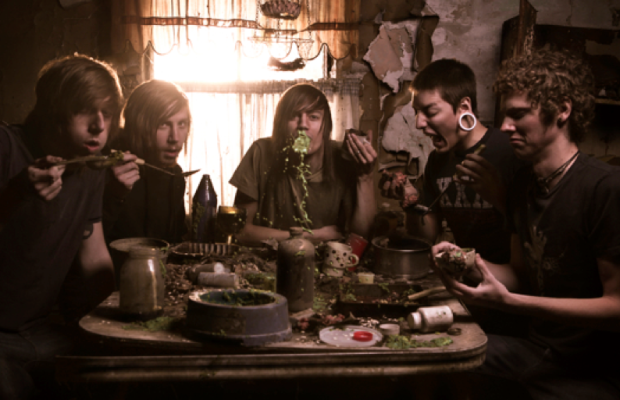 Why did you guys decide to start The Plot In You?
Well at first The Plot In You was just something a few friends and I started just so we could keep playing music together. I had joined another band and was touring a lot. So it was just something to do for fun when I was home. About two years later, we put up a new song called “Wife Beater” and kids seemed into it. So my friend from my other band who owns InVogue records asked if I wanted to release an EP just for fun. So we did, and we were stoked on it. Just recently I left the band I was in before, and now we’re all doing this full time.

How did you meet the other members of The Plot In You?
I had been in bands with two of the guys since I was like 14. Once we decided to take it more seriously and play shows on the EP, my friend that I live with Ethan joined on bass, then our friend Josh came in on guitar, our drummer Cole just joined a few weeks ago after our drummer left. He was in Ethans old band. Super good friend of ours.

What was the songwriting process for Wife Beater like?
Well I do a lot of home recording stuff, so I would just write the songs on guitar and program really simple drum parts to follow along. Then our drummer would come in and do his thing.

Where do you get the inspiration for your lyrics since they aren’t generic?
I wanted to do something with the EP that hadn’t really been done before. Child abuse, rape, murder, wife beaters, home made abortions, and child molesting hadn’t really been touched lyrically yet. Those are real events that happen to real people. The whole EP tells a story about 4 different awful people. All the stories were inspired by people I know, and things they went through.

If you could go on stage wearing any outfit of your choice what would it be?
I would wear a tux, with a saw mask, black leather shoes, and a red tie.

Who do you wake up in the morning feeling like?
Clint Eastwood.

Should we be expecting a full length soon?
Depends on your definition of “soon”. Within the year 2010, most likely.

What does the future hold for TPIY?
Hopefully some trips to the dentist, and some tours with Slipknot and Gwar.