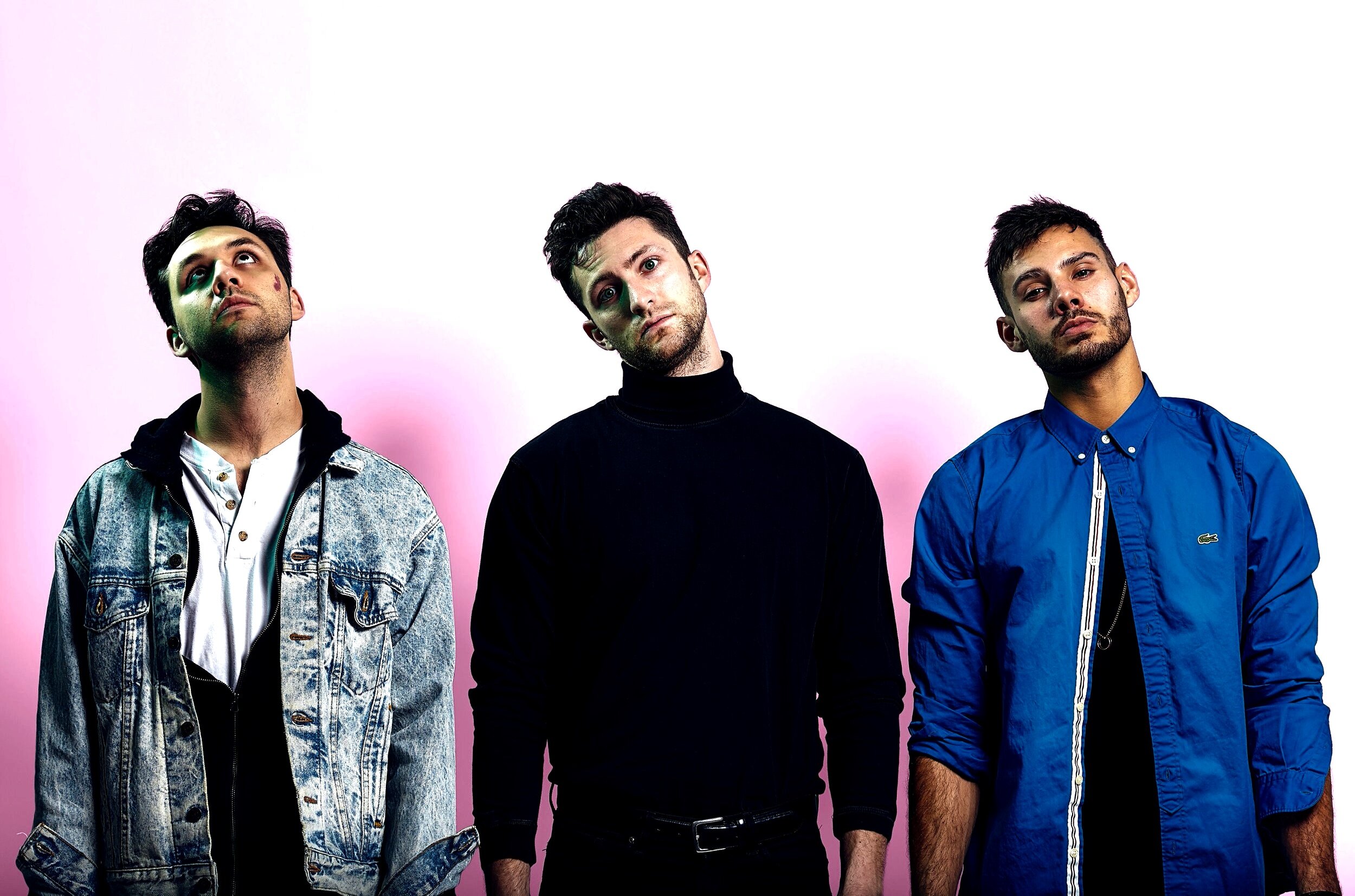 It was a beautiful scene inside New York City’s Webster Hall concert venue on the evening of Thursday, February 27. The final night of the Band of Brothers tour was off to a strong start with Ohio based indie rockers, PUBLIC, opening the show. I stood in the doorway that separated the bar area from the grand ballroom and watched the trio entice and excite the crowd for the evening to come. It was infectious and impossible not to have a smile on my face the entire time as lead vocalist and guitarist, John Vaughn’s beautiful voice serenaded the roughly 1200 people in the room.

“Raise your hand if you have never seen PUBLIC before. You have no idea who we are, no idea why you’re here,” said Vaughn. I looked around as half the venue raised their hands. What might come across as a discouraging moment for many bands caused wide smiles to spread across the faces of PUBLIC. They had spent the last thirty minutes offering the crowd a variety of their songs but were saving their best for last. “We’re going to play you the first song we ever had on the radio. If you know the chorus, sing along!” shouted Vaughn, before immediately ripping into the band’s hit single “Make You Mine.” Just before the final chorus of the song, Vaughn turned the microphone out to the crowd and let the fans take over. Chills shot up my arms and spine as the entire venue sang the chorus without a single instrument, just all of our voices singing together in harmony.

PUBLIC began in the city of Cincinnati, Ohio around 2012. The trio, who is made up of John Vaughn (lead vocals/guitar), Ben Lapps (drums) and Matt Alvarado (bass), began in high school. “We had a jazz orchestra, and Matt was a sax player in there, and it was just timing. We kind of linked up when Ben started jamming, like, White Stripes style in his parent’s basement” Vaughn explains, “and Matt just happened to be picking up bass at that time. It was like phew! [mimics explosion].” After releasing their debut EP in 2012, the guys began landing local shows and festivals like Forecastle and Bunbury as well as nationwide tours with fellow Ohio natives Walk the Moon and twenty one pilots.

PUBLIC performing a cover of Toxic by Britney Spears at The Bowery Ballroom on November 2, 2014

It was the New York City show at Bowery Ballroom in November of 2014, while on tour with Walk the Moon, that I was first introduced to PUBLIC. The guys were giving their all into their performance, with sweat dripping down their faces after just one song. I was so curious and had to know who these guys were. Over the course of several years, PUBLIC remained a proud independent, unsigned band from Ohio. They continued releasing music, filming music videos and getting the word out about their music all on their own… until they were finally noticed. In August of 2019, PUBLIC announced that they were leaving the independent band life behind to sign with Island Records.

“It all happened really quickly; it seems like.” Alvarado says. The band had already been putting out music and already garnered their own fan base by the time that Island Records approached them about signing. “It was interesting to have a team come in and battle alongside us of something that we were already in,” Vaughn shares. “Like take the fight to new places that we never would have gone ourselves.” After signing, the trio released a three-track bundle of “Make You Mine” – post Tik Tok blow up. “It’s like a whole new world and things are moving a lot quicker now.” Says Vaughn.

While it seems that Island Records have helped launch PUBLIC into stardom, it shouldn’t be ignored that the trio’s hit song went viral prior to signing with the record label. “Make You Mine” blew onto the scene in 2019 after a Tik Tok video of a wedding proposal on a football field used the song and amassed over 7 million views and counting. Since the Tik Tok was posted, the “Make You Mine Tik Tok Challenge” began and thousands of Tik Tok videos have been published, featuring the song.

While the growth and popularity might seem to the outside world that it happened overnight, PUBLIC have been working for many years for the song to reach the stardom it has finally achieved. The choice to conclude their set at Webster Hall with the song was quite deliberate and the beautiful moment inside the venue’s walls that evening when the crowd sang it back will surely stick with the band. To describe the feeling, he got hearing the crowd sing it back, Vaughn uses the word “growth.” Smiling slightly, he explains further, “It sounds simple – and it is – but, it’s just like I’ve always dreamed of people singing our lyrics back to us and to hear that now in shows… I can’t really describe it but all it feels is like ‘Man, these people have grown with our music.’” For a band that is still growing within the industry, having people singing their lyrics back to them offers them a humbling experience. “To have people that don’t know us singing that song back to us is like ‘Where did you hear that? How do you know that?’ Thank you.” Says Alvarado.

Having the first song that you get on the radio be a viral Tik Tok song can be quite the pressure to remain on top. However, PUBLIC will definitely not be crumbling under any pressure. The band of tight knit friends who are more like brothers after all of these years, have a clear vision of who PUBLIC is. The level of open communication and lack of judgement between band members during the songwriting process is rare to find. “I can’t recall a time that we ever butted heads over a song,” says Alvarado. The band continues to explain to me the level of discussion and problem solving that goes into crafting the perfect PUBLIC song. “If it [the song] doesn’t have all three voices happening in these songs, creatively speaking, it’s not PUBLIC.” Says Vaughn.

After crafting a handful of killer songs as well as revisiting some older songs, PUBLIC embarked on their first North American tour since signing to Island Records: The Band of Brothers tour with Magic Giant and fellow labelmates, American Authors. The tour lineup could not have been a better fit for PUBLIC, as all three bands radiated happiness and positivity through their own stage presence as well as their individual music. The tour had its high points, but it also had its low points for PUBLIC, as it was the first tour that the band had to cancel a string of shows. “We’ve never, in our seven to eight years of playing, had to cancel a show,” says Alvarado. But Ben caught the flu in Chicago, taking him out of the touring game for two days, the band’s vans broke down shortly thereafter and then John fell ill, causing the band to cancel three additional shows. “It was just like a stint of – we got hit with some bad juju,” Vaughn says laughing.

The tour offered PUBLIC the chance to play their songs to a lot of individuals who have never heard of them before, picking up an entirely new fan base by the end of the tour. The band cited St Louis, Missouri as being one of their favorite stops on the tour because of how supportive their crowd was. “We have a lot of friends there, a lot of fans there, so that felt almost like a headlining show in a weird way.” The trio also cited that the closing night of the show in New York was their first time playing the grand ballroom inside Webster Hall. Having played the basement with Oh, Honey a handful of years ago, PUBLIC finally got to grace the stage of the grand ballroom in what was a recognizable moment of growth moment for the band.

We made it to the end of the interview, and I began to wonder what was next on the schedule for PUBLIC. Their nationwide tour had concluded and presumably it was time to return home and take some time off to relax. I was wrong. “Unfortunately, we don’t have time off,” Alvarado explains. “We’re going to write more songs.” Lapps and Vaughn agreed, nodding their heads. “It’s cool though because it’s like another new thing for PUBLIC. We’re getting into the rooms with some people that we’ve heard their songs for years, like crazy awesome songwriters that have written ginormous hits and worked with people that we’ve looked up to,” says Vaughn. “So we’re now starting the process of actually creating music with these people. There’s a lot coming up, we just don’t really know what it means yet.”

Without a doubt, the future is blossoming for PUBLIC with new opportunities presenting themselves at every corner. As a supporter of the band since their early stages it has been an honor and treat to see how PUBLIC grew and evolved as a band and how they will continue to evolve into the future. It’s bright, it’s effervescent and it’s smiling, just like Ben, John and Matt. It might sound tacky, but it’s honest. PUBLIC have a level of humility and a strong work ethic that will take them far in this industry and I am so excited to see these guys climb the ladder of success.