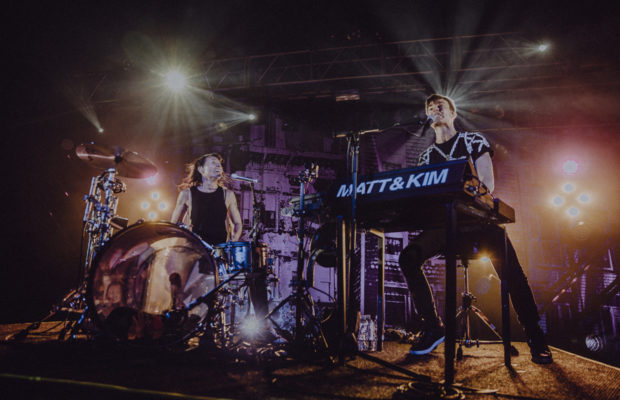 After being forced into a year long hiatus after an on-stage injury in Mexico, indie-pop duo Matt and Kim returned to the stage on Friday night with a fire burning inside. New Jersey’s Starland Ballroom was the official return of Matt and Kim and the first night of their nationwide tour in anticipation of their forthcoming album Almost Everyday. The duo brought along queer pop band TWINKIDS and Philly based indie rock group Cruisr to start off the night.

Bathed in red lights, TWINKIDS graced the stage. Donned in transparent plastic jackets, the band brought their synth infused sultry songs to Starland Ballroom. The crowd was really feeling it as they danced around with beers in their hands. Lead vocalist Gene Fukui, born and raised in Japan, treated the crowd to a Japanese song that held a special place in his heart. While TWINKIDS played a short but sweet set, the night was far from over.

The next band were no strangers to me. Both hailing from Philadelphia, PA, Cruisr and I go way back. Watching the band amp up the crowd and perform their songs on Friday night was a beautiful moment. From the small venues in Fishtown to the big stage at Starland Ballroom, Cruisr played a lengthy set filled with classic favorites like “Kidnap Me” and “All Over” as well as some new favorites. “For those of you who know us, you know that we haven’t released music in a really long time,” lead vocalist Andy States said to the crowd, “Well, that’s about to change really soon”. The new tunes that were debuted at Friday night’s show were certified bops that are sure to launch Cruisr into the spotlight. Cruisr’s set ended and it was time for the real deal.

The crowd was screaming and howling in anticipation for Matt and Kim and as the lights went dark, the audience lost their minds. Matt and Kim graced the stage — or rather, they ran onto the stage and began twerking to rap music. The party had officially started. The duo wasted no time and jumped right into “It’s Alright”. My favorite part about a Matt and Kim show is their live energy and commanding stage presence. While standing at the back of the venue Friday night, I realized that Kim Schifino is quite literally Ilana from Broad City. If that’s not enough to paint a picture, at the halfway point of the set, Kim dug out two massive dildos that replaced her drum sticks and continued the remainder of the song with them. The bands massive setlist included some personal and crowd favorites “Cameras”, “Can You Blame Me”, “Daylight” and “Get It”, among others. There were plenty takeaways for the crowd inside the venue Friday night, from the blasts of confetti that emanated from the stage, to the free t shirts that were thrown out and if that wasn’t enough, the blow up dolls that were tossed around as a parting gift at the end of the show.

Matt and Kim’s performance on Friday night was unparalleled and unlike anything I’ve ever seen before. You could just tell from the moment the band stepped on stage that performing and playing their music is what they love to do and not being able to do it for so long was excruciating for them. Their energy bursted like a bubble and flowed throughout the entire venue. You will never get tired of seeing them live, so I urge all of you to get your butts to the next Matt and Kim show!