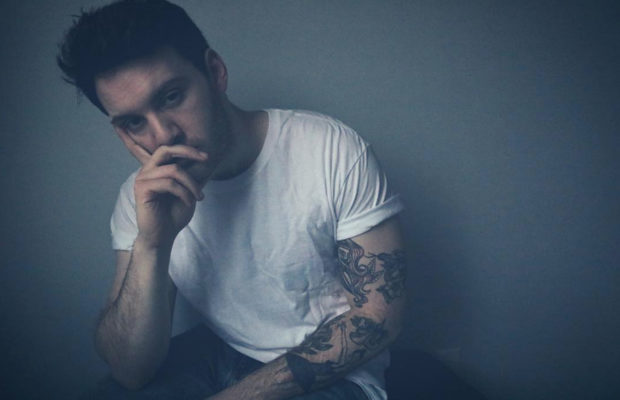 Although new to the scene, New York indie-pop artist Joe Wood is already generating a buzz with his released material.  With four songs out right now that combine the the sounds of synth-pop and R&B, Wood showcases his impressive songwriting abilities and knack for irresistible hooks.  Having drawn comparisons to Bleachers, LANY and St Lucia, Wood is slowly but steadily growing a solid fan base through his online presence and live shows.  Our staff writer, Emily May, recently interviewed Wood. In the interview, he discusses what he finds inspiring about New York, his love for playing live, his DIY approach to music and his new lyric video for the song “Had Enough”.  You can check out Wood’s current music on his soundcloud here and stay up to date with future tour dates and new music on his Facebook page here or his website.

EM: You grew up musically gifted with a perfect pitch and are self-taught on guitar, piano and songwriting.  Did you always have the desire to have a career in music?

JW: Yes! Up until junior year of high school, I wanted to go to school for tuba performance and then teach music in high school. I was so inspired by my high school band teachers and the positive impact they had on me. I starred in a musical that same year and completely shifted my aspirations towards acting through college, though. I realized I should stick with music when I was turning to songwriting to cope with the frustrations I was having dealing with being an actor in New York.

EM: Much of your family is hearing impaired.  What was that like for you growing up? Were they supportive of your love of music growing up?

JW: They were absolutely supportive. I feel incredibly lucky to have such a wonderful family that has always pushed me to follow my dreams. My father and sister have hearing aids and cochlear implants, respectively, and there wasn’t much difference in my upbringing other than knowing there would be times I couldn’t connect with them in some musical aspects. I got to volunteer and help out at my sister’s school for the deaf a few times, and I am fortunate to be exposed to an entirely new community growing up.

EM: Your music combines elements of soul, R&B and electronic music.  Who were your musical influences growing up? Have you always been drawn to combining your different influences into a one cohesive sound?

JW: I always find myself drifting around with my influences, but always cite MJ as a huge one. His music had a very meticulous approach to rhythm and how the rhythm and melodies ebbed and flowed with the production. Besides his obvious talent, I believe his music lives on because each song is so well-crafted, from a theory standpoint. Lately, I’ve definitely drifted away from the R&B and back to my bread and butter, which is actually synth-pop. I actually find a lot of inspiration in film, specifically film soundtracks. A perfectly placed song in a film can really have a lasting impression on the viewer. I’ve always been fascinated with how some songs become instantly iconic because of the film scene in which it played. Some of my favorite soundtracks – Pulp Fiction (or any Tarantino), Goodfellas, Drive, and a new one – Call Me By Your Name.

EM: Your music has been compared to LANY, St Lucia and Bleachers.  How would you describe your music?

JW: Think extroverted-introvert that consistently has a desire to unpack his frustrations or emotions. Music has become a vehicle for me to talk to the world about the feelings I have. I have such debilitating social anxiety at parties where I don’t know many people, and sometimes it will be a literal struggle to even walk through the door. I often think of times where I was too nervous or anxious to speak, and write about exactly what I wanted to say. Musically, I want my songs to capture the moment that so many can relate to, and this often translates to this pretty explosive outburst. I like to think of me as- putting Robyn and Bleachers into a blender.

EM: You are from Long Island but have since relocated to NYC. What was it about New York City that drew you there as opposed to a different city? What do you find inspiring about the city?

JW: Well I’ve always wanted to be here. I definitely saw leaving home as a paramount goal if I wanted to take a risk and grow as both a human and an artist. New York was conveniently located to my childhood home, and I was familiar with it because of college. Weirdly, I think the most inspiring thing about being here is the constant uphill battle. It forces you to really question if you want to do this, and if you can combat the constant rejection and financial instability, I think it really proves that you want to be an artist. There are so many people doing the same as well, and it is amazing to be a part of a community of creatives all pursuing their goals.

EM: I read that you originally moved to New York City to pursue acting. What led you to change course and focus on music instead?

JW: I was continuously turning to music as my creative outlet while acting wasn’t working out. I figured at that point I should just stick with music, which is what I was better at, anyway. Hopefully one day I can somehow hop back into it. I love and miss being on stage in that way.

EM: You have mentioned that playing live is your favorite thing to do. What do love about being up on stage?

JW: I love how starkly different it is from me at my day jobs. I’m usually doing some insane shifts and running on no sleep. My coworkers know me as the guy that always looks tired and mumbles a lot. Performing my music live and telling my story is the most exhilarating thing I can do. I really come alive and that really is “the real me”, not stifled by being in a uniform, maintaining a “professional demeanor” and waiting on one-percenters.

EM: What is your songwriting process? Do you find yourself always writing? What inspires your lyrics?

JW: The lyrical melody and rhythm come first for me. The lyrics themselves are always the finishing touch. I’m inspired by all of the moments that I wasn’t brave enough to say what I had to say.

JW: Trust me, I wouldn’t embrace the DIY approach if I didn’t have to. If its just me, I spend years on a song before releasing it. I’m actually now realizing the power of collaboration, having multiple people invested in something can lead to a much faster product being created. I do love the fact that I work on all my music from a production standpoint, though. When I finally get to perform it, it’s like the end of a long and frustrating journey just to finish the track.

EM: Your Had Enough lyric video has been really well received. How did you meet and come to work with Danny Casale on the video? Do you have plans to do more videos?

JW: I luckily met Danny at my old school, Pace University. I hit him up because I thought he would be able to bring my vision to life in a way that many people would be able to appreciate. Many more videos coming in 2018, but with some live visuals. Maybe a dance video on the horizon…

EM: Do you have any upcoming tours or festivals that you are looking forward to?

JW: Nothing lined up, but always working on my live show.

JW: I’m definitely getting all of my ducks in a row right now. Getting a bunch of new material lined up and I’ll be trying to expand my team (management, publishing.) Going to wait for the right moment to release it all, but once it’s released it’s going to be huge. Trust me!

Check out the animated music video for Wood’s newest single “Had Enough”, below: