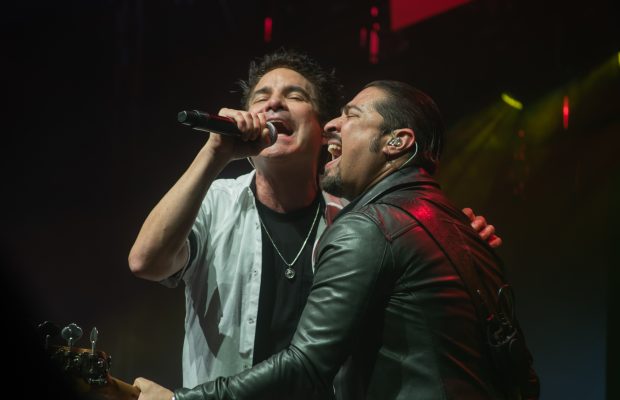 Houston and it’s connecting suburbs like The Woodlands have complicated weather. It storms one second and it’s sunshine for the rest of the day. That was the case right before the co-headlining tour between Goo Goo Dolls and Train, there was lightning in the air outside the Cynthia Woods Mitchell Pavillion on Friday, June 28th. Thankfully my ticket was stamped rain or shine because this wasn’t a show to miss.

The two veteran alt-rock bands brought along for the soulful R&B singer Allen Stone along as their opener. At first, I thought it was odd to have an R&B singer as an open up for these bands, but as the rest of the acts followed I found thought Stone fit in well. His smooth vocals actually matched that of Train’s Patrick Monhan. The 32-year-old singer-songwriter was entertaining to watch and stage and really helped keep the anxious somewhat damp crowd cool and relaxed.

Goo Goo Dolls took the stage next. This is my second time seeing Goo Goo Dolls this year, sadly I missed half their set during their Dizzy Up the Girl 20th anniversary tour last year. So I was happy to finally see them perform all the way through. They did a really good job of mixing in a wide variety of their songs throughout the set list. I’m sure after playing Dizzy Up The Girl for so long the band was ready to shake things up. I love hearing “Slide” performed live, it is my favorite Goo Goo Dolls song and it was wonderful to sing along to catchy love song. I was surprised that the band didn’t close their set “Iris” which is arguably the bands biggest song. Instead, it was played second to last and the band closed out with the more upbeat “Broadway”, at first I found it odd, but it’s actually a smarter choice to leave the crowd hyped. While “Iris” is romantic and beautiful it’s not as fun as “Broadway”. I felt like the band is ready to perform new music from their upcoming album Miracle Pill. There is an eagerness and excitement in lead vocalist John Rzeznik when he talks about the new music that really does explain to me how a band like Goo Goo Dolls can keep themselves around for over a two decades. It’s their love for going forward and always creating new music that I believe keeps the band thriving.

Next up was Train. My in-laws are pretty big Train fans and try to get to see them live as much as possible. I completely understand their love after seeing the band perform live. They perform with so much energy and life on the stage that it was hard not to sing along and have fun. They opened up their set with “Calling All Angels”. Patrick Monhan is captivating as he picks up fans photo gracing them with selfies and expertly tossing them back. A couple of my favorite parts of their set were actually their covers. Singing everything from Jay-Z to Led Zeppelin there was something magical about seeing the bands love for other artists. Allen Stone joined the band on stage for an intro to Jay-Z’s “Empire State of Mind” then he stuck around to fill in for country singer Ashley Monroe who sings on the track “Bruises”. A moment I loved during the song “Hey Soul Sister” Monhan talked about how he mostly listens to hip-hop music and asked the crowd if he could sing one of his favorite songs, then perfectly went into ’18 summer hit by Drake “In My Feels” sending the crowd went wild. Overall there was good energy. This summer tour was exciting and full of fun nostalgia.