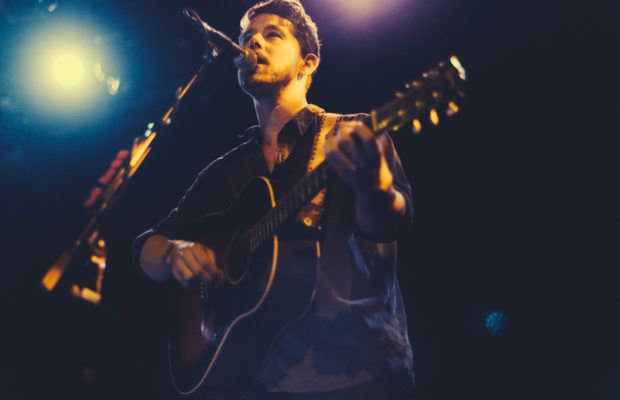 Boy & Bear are a band based out of Sydney Australia and they have been creating music together since 2009. The venue is relatively full when I arrive, halfway through the opening act’s set. By the time Boy & Bear take the stage, the venue is packed with fans eager to see the band perform. Boy & Bear is made up of five members, Dave Hosking on vocals and guitar, Killian Gavin on guitar, Timothy Hart on drums, Jon Hart on keyboard and Dave Symes on bass. All members of the band also do backing vocals; they’re a very talented bunch of lads. The girl’s standing next to me periodically declare their love for Hosking throughout the night, to which he chuckles uncomfortably, but never says it back to anybody in the crowd. It’s pretty endearing to see a front man that doesn’t quite know how to respond to the love of adoring girls.

Hosking goes from playing acoustic electric guitar, to not playing any instruments periodically throughout the evening. They play a song filled with amazing tunes, such as “Harlequin Dream” and “Real Estate”. My favorite part of their set though is their cover of Amy Winehouse’s “Back In Black”. Their rendition is beautiful and pays a great tribute to the late Winehouse.

I would definitely suggest checking out Boy & Bear as they continue their tour over the next couple of weeks and it heads around the US and up to Canada. If you like indie-folk rock this is definitely the band for you!