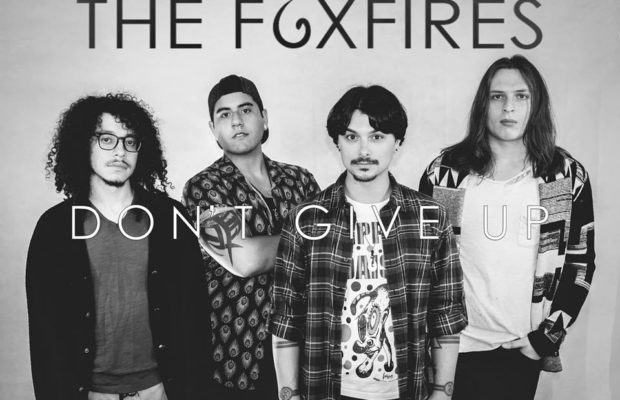 New York indie rock band The Foxfires have been gaining a steady momentum since 2013, having shared the stage with Michale Graves (former Misfits frontman), Kurt Travis (former Dance Gavin Dance frontman) and Jennifer Hudson.  With a sound that’s described as Seagaze, they blend indie pop, folk, surf rock and shoegaze to form their own unique sound.  The band released their first full length album in 2016, as well as two new singles this year entitled “Don’t Give Up”, an anti-suicide song and “Choose Love”, based off their four year campaign to move towards a more equal and empathetic society.  With plenty of shows and festivals coming up this year, the band is poised for their biggest year yet.  You can stay up to date on tour dates and band news on the band’s website here and on the band’s Facebook here.

EM: How did you guys meet and decide to start a band together?

Christian Cordero and Christian Diana both had known each other for a little while from playing shows together. One day they met up at an open mic and decided to jam in CD’s basement and everything just kinda clicked. We soon enlisted Adam, who was formerly in CC’s (We distinguish the Christians by CC and CD) old band, The Nightingale Effect, on bass and our former drummer. We all shared a ton of similar values and taste in music. After things didn’t work out with our previous drummer, we played shows as a three piece with Adam, CC, and CD until we met Brandon at one of those shows. He was eager to jump on board and bought an entire drum kit just to try out for the band. Needless to say, he was the one we needed and our lineup was secured.

EM: I read that the band was originally named Christian Diana and The Foxfires.  What led you to shorten the name to just The Foxfires?

In a word- memorability. Christian Diana and The Foxfires puts too much emphasis on one member and not only that, but it’s not very memorable because of its long-winded nature. We originally took the idea from Edward Sharpe and the Magnetic Zeroes, because we were listening to that heavily at the time. It just seemed more people were calling us The Foxfires than the previous moniker.

EM: Your sound has been described as Seagaze- a blend of indie pop, folk, shoegaze and surf rock.  How did the term Seagaze come about?  Who were your musical influences growing up, as well as current influences, and how do you feel they have shaped your sound?

Seagaze comes from our cumulative love of the ocean and the philosophy of Bruce Lee’s being “like water”- able to adapt to whatever is containing it and able to crash or flow and be open to change. Our music comes from so many different influences that we try to be adaptable to acoustic, electric, dancy, ethereal types of settings, which can all be vastly different. Some of our influence growing up and still to this day have been Wilco, Death Cab for Cutie, Ride, Green Day, Joy Division, Beach Fossils, The 1975, Mumford and Sons, Silversun Pickups, and literally a laundry list of other influences from across every genre, really.

EM: You have opened for some amazing artists such as Kurt Travis (Dance Gavin Dance) and Michale Graves (Misfits).  Is there anyone going forward that you would love to share the stage with?

Definitely Beach Fossils. We definitely believe in their sound and their energy. They’ve done a great job being a very successful indie rock outfit in the past decade and we’d love to share the stage with a band as personable, vibrant, eclectic, and awesome as them.

EM: You released your first full-length album, Reawakening, at the end on 2016.  It’s been described as “a bold step forward for the band in terms of songwriting, musicianship, production and artistic individuality”.  How do you feel your sound, as well as you as musicians and individuals, have grown since you first started?  What do you think prompted your growth?

Our music originally started as this kinda ocean grunge as one redditer once put it. It had a ton of fuzzy/shoegazey elements to it. Our sound very much matured from that into something that embodies an oceanic sound that is enjoyable for a wider audience. Our goal has always been to reach people and make a positive impact, whenever we can. Our two new singles, “Don’t Give Up” and “Choose Love” were very much heavy steps in that direction. They far surpass what we did with Reawakening and Reawakening far surpassed our previous three releases. A part of our growth was definitely our drummer joining in 2015. He very much gave our sound a new life and gave the direction that we wanted to head in a new body.

EM: Reawakening was produced by Grammy Award winning producer Ted Young (Hawthorne Heights/Sonic Youth/Taking Back Sunday).  What was it like recording with him?  What was the recording process like for the album?

Ted Young is by far the easiest producer we’ve ever worked with. Super down to earth guy, honest, hardworking, smart, funny, and very sage like when it comes to what sounds right in the studio and what doesn’t. Recording Reawakening and our two new singles felt very natural. We went in and did our recording and such, but we worked at a rapid pace and enjoyed every second of it. It was both productive and enjoyable. He’s such a humble guy and we adore him for how well he works with us.

EM: What is your songwriting process like? What inspires your lyrics when writing songs?

Typically what will happen is that CD will bring a skeleton of a song with lyrics to practice and from that, we will all write our parts for what we envision for the song. We’ll toss around ideas and make suggestions to each other to change something here or there. It’s very much a joint effort in making our songs what they become. The whole is greater than the sum of what any number of us could do individually. It’s a rewarding process.  Our music is very much music that takes a stand and we feel it’s not only important for us to hear but also for the world to hear. It’s less about the vanity of songwriting and much more about being the change we wanna see in the world. What our music means to us is almost irrelevant when it comes to what the purpose of it is in general- making the world a better place.

EM: You just released two new singles for Don’t Give Up, an anti-suicide song, and Choose Love.  What inspired Don’t Give up?

The rise in suicide numbers and the recent deaths of Chester Bennington and Chris Cornell very much inspired the song. We’ve all as a band struggled with suicidal thoughts or attempts and we realize now in our better states of life that it’s worth it to carry on and fight the fight to see what happens later on. It’s not always easy, but it will get better 9/10 times unless you have a terminal disease or a degenerative disease. In those cases just like all others, you should savor the marrow of life and make the best of what you have while you have it. Life is a gift and an opportunity that not all have and it’s up to us to make the best of our own and the best of others.

EM: I read that Choose Love is based off of a campaign that the band has been pushing for the past 4 years to move towards a future of peace and equality for all, one where people embrace all of humanity.  What led to the decision to launch this campaign and what has the reaction been so far?

We just wanted to be the change we wanted to see in the world and to let ourselves stand for something larger than ourselves. The reaction over the past 4 years has been exceptional. Stickers with Choose Love on them can be found all over the east coast and midwest and we feel that it’s one way to put a positive energy in the world.

EM: What was the idea behind the video for Don’t Give Up?  It looks like it was a lot of fun to make!

We wanted the heavy subject matter of suicide to have a brighter perspective than a gloomy video. People having fun and urging you to not give up on your life is a matter of taking something which can be commonly construed as being uncomfortable subject matter and putting a positive spin on it in order to cheer someone up and let them not feel alone.

EM: Do you have any tours or festivals coming up that you are especially excited about?

We will be playing at PEX Festival in Philadelphia this June and there are other events, not yet, but soon to be confirmed that we will be announcing as they are finalized.

We’ll always keep writing music and playing out and spreading our message. We really wanna spread the good word. Festivals, licensing, and merch are all gonna have a big year for us in 2018, but you’ll have to stay tuned to find out what’s coming soon.