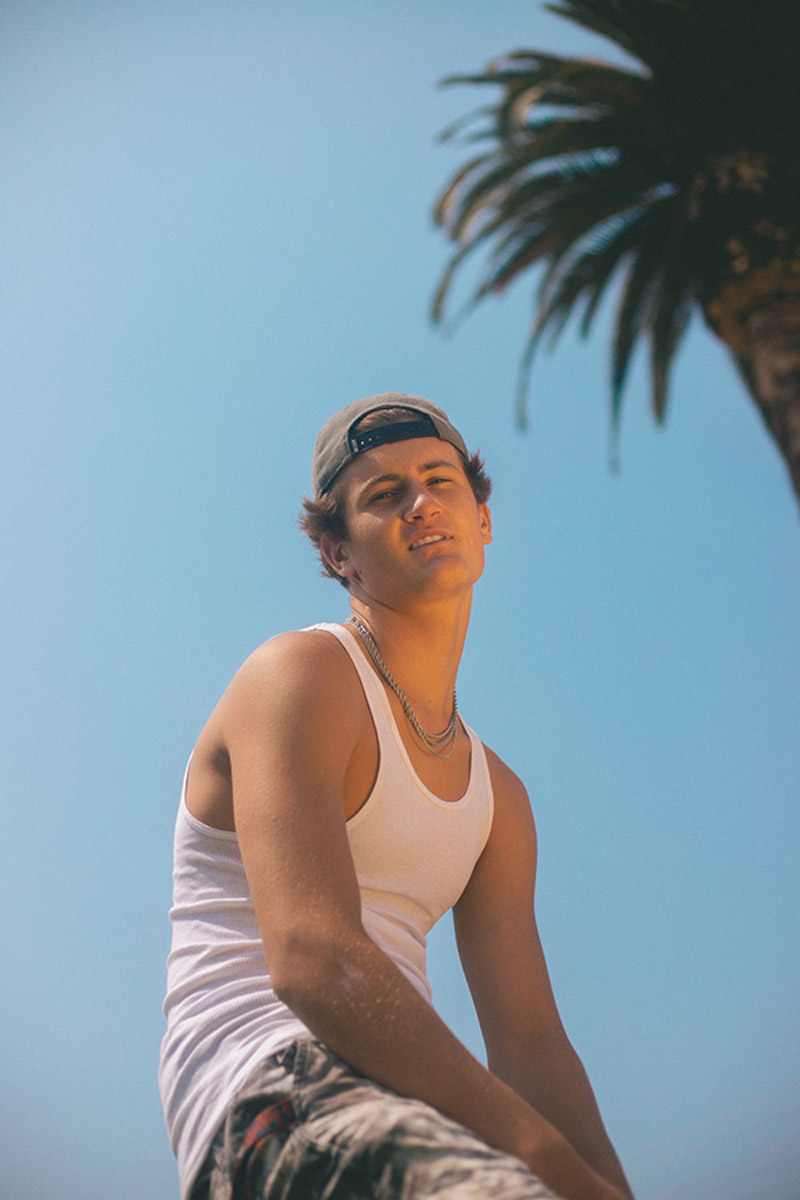 LA-based singer, songwriter, and rap artist Arden Jones grew up surrounded by music and was heavily influenced by being near the musical mecca of San Francisco.  Born in Marin County, just north of the Golden Gate Bridge, he spent his childhood around performers and, aside from attending concerts and festivals in Oakland and San Francisco, was exposed to a wide array of music at home.  He taught himself to play guitar, piano, mandolin and stand-up bass, and was most inspired by rappers, everyone from 50 Cent and Tupac to J.Cole, Chance, Russ, XXXTentacion and Mac Miller. He began writing songs in high school, recording music in his room late into the night when he was supposed to be doing his homework.  Although he studied film in high school at the Marin School for the Arts and attended college at the Dodge Film School at Chapman, by the end of his freshman year he realized that all he wanted to do was focus on his music. He quit college and moved to LA to focus on his music full-time and began to release songs, initially on SoundCloud and then on all platforms.  He was discovered in December of 2020 by Vnclm_, an LA based label formed in a joint venture with Atlantic Records, and was signed in January of 2021. January of 2021 saw the release of his first single “Parallel Parking”.  The release went viral on TikTok and amassed millions of streams across various platforms, effectively launching his music career.  The track also charted on Spotify’s Viral 50 charts in Australia and New Zealand and was featured on New Music Friday and other top playlists (including Fresh Finds: Pop, Pop Sauce, Front Left, Good Vibes, softly, Summer Chillout, Varsity Bars, and young & free and others).   Having released other singles including “Roll The Dice”, “SMILE”, and “Rollercoaster”, he most recently released his latest single “either way”.  “’either way’ is a song about perseverance and hope,” Arden says. “No matter what happens, good or bad, one thing you can be sure of is the sun rising the next day. I love thinking of things this way because it makes it feel like we are all alright. Nobody really knows what they’re doing in this life, we are all trying our best.”  With plenty of music on the way in 2022, make sure to connect with Arden Jones via the following links to stay up-to-date on all upcoming music news and live dates!

You are from a family of musicians and writers and were musical yourself from a young age.  What can you tell me about your childhood and how that musical and creative environment informed your love for music?  What impact do you feel that growing up near such a musical mecca as San Francisco had on you as an artist?

Growing up in San Francisco meant a lot for my music. Aside from the shows and music festivals like Outside Lands the music I was surrounded by shaped who I am as an artist. Watching people like 24kGoldn and SOB as well as some smaller alternative artists gave me hope in making a career out of my craft.

You started writing songs in high school and would stay up late into the night recording songs.  What was your early songwriting process and sound like and how do you feel you have grown as an artist since then?

I think I used to be much more tentative with the music I was comfortable making and releasing back in high school. I’ve definitely grown into myself much more over the past few years and have a much better idea of what I want to be as an artist. Five years ago I wanted to be a rapper and didn’t realize that I could fall into the alternative indie scene.

You have said that your dad probably played the biggest role in inspiring you to get into the music industry.  In what ways did he inspire your decision and what kind of advice did he give you?

Although my dad always gave me great advice, I think more than anything it was his support and love for music that drove me to believe in myself.

You studied film in high school and then moved to LA for college, where you briefly attended Dodge Film school before leaving your freshmen year to pursue music.  You released your first single “Parallel Parking” in 2021, which instantly blew up on Tik Tok and Spotify.  What can you tell me about the single?  Did you ever expect that it would find such an instant and rapid success?

I had a lot of faith in my music but I knew how hard it was regardless. I tried to set my expectations low and was so surprised and honored by the response it got. I feel so lucky for that to take me to where I am today and I am very happy with that as a first song.

What can you tell me about developing your own layered pop/rap crossover sound as an artist? Did you know starting out what you wanted your sound to be or did you experiment a bit to see what fit?

I didn’t really have a plan for what my sound would be. I just wanted to make what I thought sounded good. I also had a love for many different types of music so I try to pull those all in.

What can you tell me about being discovered by Atlantic Record’s Vnclm_ label in December of 2020 and being signed in January of this year?  It sounds like things have happened quickly for you!  How has the experience been so far?

My manager Mike Kosak and the rest of the VNCLM_ team had so much faith in me in the beginning and I’m very thankful for that. The joint venture with Atlantic took everything to the next level with Jordan Marsh and Jeff Levin stepping in and giving me all of their knowledge on the music industry. I love the team I have around me and I’m so excited to keep working.

You have released a series of both music videos and visualizers for your tracks.  Having studied film in school before embarking on your music career, how do you think that informs your aesthetic when it comes to making the visual accompaniments to your songs?  For your video for “Carsick”, your friend Justin Kaminuna shot the video on Super 8 film.  What can you tell me about that video and do you feel you will do more Super 8 film videos in the future?

I love everything about film and enjoyed my time at Dodge film school. In terms of super eight, I’m not very knowledgeable at all but would love to be. I think it’s fascinating how those older styles of film and photography are coming back.

What has it been like for you to live in LA and pursue your music full-time?  What do you find inspiring about the atmosphere in LA when it comes to songwriting and making music?

Living in LA is of course a dream come true. I get to work on music every day and do what I love for a living and I am so thankful for that. I have met so many of my best friends through music and find myself learning more and more every day.

Having written, recorded, and released music for about 5 years before catching your big break, what has that experience been like for you?  What have you learned about yourself in the process and what has it been like to grow an organic fan base over the years?  What kept you going when you wanted to give up?

It’s been a long journey and I think the biggest takeaway for me is that your work will be rewarded at some point and your career will be full of ups and downs. The fact that it took me so long to get going keeps me comfortable in making music every day without immediate results.

You recently released your new single “either way” that is about perseverance and hope and reminds us that “either way the sun’s gonna shine”.  What inspired the song, as well as the visualizer?  What do you do to lift your spirits when you are feeling down or not positive?

I wrote “either way” for that exact reason, to lift spirits. I think it’s super important to keep your chin up and realize that not every day is the same and life will throw anything it wants at you. “either way” was a record for happy and sad times.

I’m just going to keep writing music and showing the world what I have to offer creatively. I think 2022 is going to be quite a year and I can’t say too much about it, but there will be a lot of music from me.