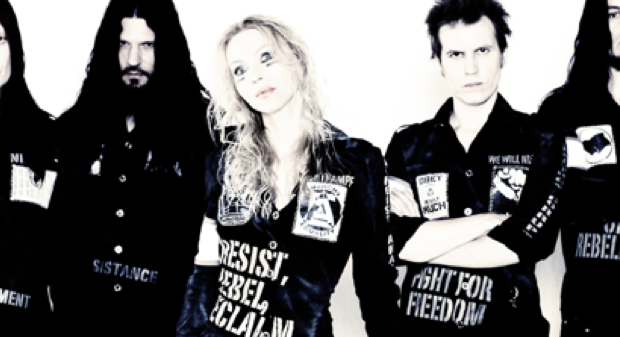 For The Root of All Evil, you decided to re-record a collection of songs that you’ve recorded on past CD’s. Why did you decide to re-record older songs now, rather than in 2006, for your 10th anniversary as a band?
In 2006 we were constantly on the road, touring for Doomsday Machine. We didn’t have time for yet another recording project. We are not a studio band – we are a live touring band. We always wanted to re-record some older tracks to give the back catalog a 2nd life but simply didnt have the time to do this until beginning of 2009 when we actually got off the road for 2 months to get the project done in the studio.

I believe that you have a supporting tour for Khaos Legions in North America coming up this September. Hailing from Sweden, do your American crowd and your Swedish crowds differ in quality, participation, etc?
The Swedish crowd is not as intense as the US crowd.. but within Europe you’ll find a lot of countries that match the intensity of the American audience. The art of crowd surfing and throwing a circle pit has spread to our shores as well 😉 We do not see ourselves as a Swedish band – Michael and Christopher are British, I am German – but rather as a European band.. And as a touring band, we do not focus on the Scandinavian market but are actually doing very well worldwide. And i can say from 10 years of experience – a metal audience is always intense and passionate. Nobody’s trying to chill out at an Arch Enemy show, haha.

Khaos Legions had out-sold all of your other records and became the AE’s highest chart topper to date. Back while you were recording the album, did you expect it to overcome your previous albums’ success?
We expect us to record another killer album – but when it comes to sales and chart entries, we have no expectations. Not in this day and age. It doesnt really mean much anyway. For every album sold, 10.000 kids have downloaded it for free. What matters is the fan base that comes out to our shows. And thats a growing entity for us. This is all that counts. Playing killer live shows – we live for that!

What do you do on your downtime during tour?
I work in my ‘downtime’, as I manage Arch Enemy. Michael usually works as well, he handles a lot of press/PR and has a lot of endorsement partnerships going on.. The other guys just chill, hang out, watch a movie, drink a beer, listen to some music, go and check out the city.. easy going stuff.

The cover art for Khaos Legions is yourself and your band members as skeletons holding flags. What’s the significance?
The cover artwork is inspired by the French painting ‘Liberty Leading The People’. The cover shows the last survivors of the final apocalypse, holding the black flag up high, hopefully leading to a new, better world. The cover shows the different meanings of the word chaos.. ‘Khaos’ as in the Greek mythology, meaning ‘creation out of chaos, a new beginning’, but also in the anarchistic meaning of chaos – no government, no rules, starting society from scratch.

Do you have a preferred country or city to perform?
We prefer the places where we can pull heaps of people in, haha.. A packed show is a great show!

“Yesterday Is Dead And Gone” was released as a music video earlier this year. Can you please explain what the meaning behind the video was?
The video and the lyrics are very inspired by the current Zeitgeist – the uprising and revolution going on in North Africa and the Middle East. It shows ‘the people’ fighting the military/police/government forces. The message is simple, yet very up-to-date: It’s time to leave the old world behind us in flames, yesterday is dead and gone, we are ready to start something anew. You can see exactly that happening in Egypt, Libya, Syria, Morocco, Tunisia – just watch the news.

In your opinion, what’s AE’s biggest accomplishment as a band?
We have been working relentlessly since 2001, never gave up, made it through all highs and lows, never compromised our attitude or sound. We have a very unique sound, you can always recognize it’s Arch Enemy. I’d say finding that trademark sound is what most bands strive for.. We have accomplished that. Pure fucking metal!
Thanks for the opportunity! Is there anything you’d like to cover that I missed? Yeah – we are currently on tour with Devildriver, Skeletonwitch and Chthonic. Killer line up, all the bands absolutely slay! Come on out celebrate metal with us.