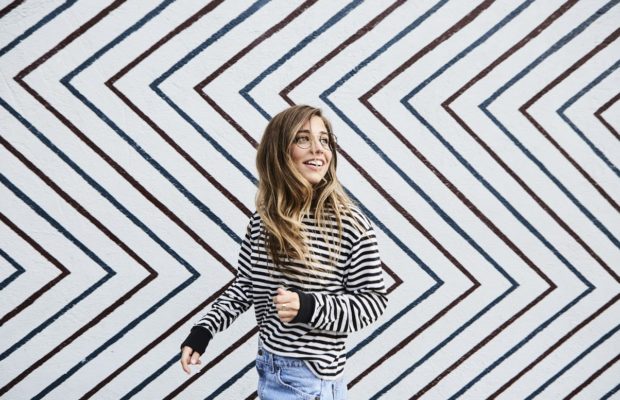 Nashville musician Josie Dunne is a star on the rise.  Having begun performing at the age of 13, the now 21 year old is paving her own way through the music industry.  With her fusion of Motown, soul and modern pop music, Dunne is creating a sound all her own.  Dunne’s debut EP To Be The Little Fish will be released this May, with the first single “Old School” already creating a buzz of excitement and positive reviews.  She will be performing a hometown show at Exit/In in Nashville on March 29th.  You can stay up to date with news and upcoming tour dates on her website here or on her Facebook page here. Our staffer Emily May sat down with Dunne to talk growing up in a musical family, her debut EP and much more. Check it out below!

EM: You grew up in a creative and art loving family in Chicago. What was it that drew you to music as opposed to a different artistic outlet? How did you decide that music was the career path you wanted to pursue?

JD: I picked music instead of the other arts because it was the one that came most easily to me. My siblings and I got really lucky to have figured out what we wanted to do with our lives from a really young age, and I think for all of us, it really naturally kind of fell in our laps. I was just always the musical one, my brother was always the painter, my sister was always the dancer, and my little brother always used technology to pursue his art. My parents just encouraged us to do what we loved and all figured out what that was really quickly.

EM: You flew to Nashville in high school for writing sessions with various producers and co-writers, many of whom were your idols. How do you feel that these sessions helped you to shape your style?

JD: In high school, I felt like Hannah Montana! Haha! I was getting to go to a normal high school in the suburbs of Chicago and once a month, fly down to Nashville and write with people that wrote or produced some of my favorite songs or records of all time. I still feel so insanely lucky I get invited in writing rooms with some of the people I do.

Nashville is such an amazing town to be an artist in- especially a pop artist. It’s a town that’s really geared towards telling the artist’s story as genuinely as possible. I think being here, as opposed to LA or New York, helped me really get to the core of who I am, what I want to say, and how I want it to sound. Being here, I had to write songs that I felt like only I could sing as an artist. So, I’m hoping that people can hear ‘me’ in the music, because of the fact that I started my artist journey here in Nashville.

JD: MoTown and Soul music are the best because you can just feel each song in your gut. I think growing up on the oldies forced me, as a singer, to learn how to feel everything I sing. Unlike a lot of my favorite soul singers, I’m super grateful that I’ve had a really easy, amazing life so far. I have super supportive friends and family and I grew up in a great, encouraging community. So, I always connected more with the message of fun, upbeat pop songs. I think I’ve tried to blend the two worlds so that there’s the rawness of the Motown songs in the music, mixed with the catchiness and happiness of a pop song.

EM: How do you feel the music scene in Nashville differs from Chicago? What do you love about living in Nashville?

JD: I love living in Nashville so much! There’s such a great community here. It’s growing bigger and bigger everyday, but it still feels like a small town. There’s so much charm in bumping into people you know at the grocery store or a commute only being 15 minutes at most. The music scene here is much more involved than in Chicago. I think Nashville being “Music City” adds a real legitimacy to the scene here, so I’ve grown so much more as a songwriter, artist, and human being here than anywhere else. I will say, I really miss the Cubs. Ha!

EM: You’ve been described as a talented and authentic storyteller. What do you think the components are for a great story? What kinds of things influence and inspire your lyrics?

JD: With my songwriting, I’ve really tried to tell real stories that either I’ve gone through or I’ve seen my friends go through. I’ve grown up in a totally normal, happy, Midwestern family. The stories I tell in my songs have been shaped around me just being a normal girl, I guess. The EP talks a lot about falling in love for the first time, getting my heart broken for the first time, just living a normal, but nice life. Haha- Maybe that’s boring or cheesy but it’s what I know and I feel like it’s what most of America knows, too.

EM: You started performing shows in middle school and started flying out to Nashville in high school for writing sessions, having an incredible amount of motivation and drive from a very young age. What do you think has helped to sustain that motivation and passion for music?

JD: I don’t think that I’ve ever felt more passionate about anything than I have about music. I don’t have a backup plan with my life- it’s always been writing songs, playing instruments, and singing. I simply knew it was what I wanted to do.

EM: You had the opportunity to lay down vocals for your song “Cool With It” at the legendary Blackbird Studios in Nashville. What was that experience like for you?

JD: Recording in Blackbird was really special. There’s so much history there and you can feel it. Plus, the amenities there are amazing. To figure out what microphone I should use, we set up about 6 different incredibly rare and expensive mics in a row. I sang a verse, stepped to my right, sang a verse on the new mic, stepped to my right, and so on. Then listened back at what microphone we liked the tone of the best. It’s hard to find a studio that has that much amazing gear that you get the option to do that. Plus, I felt like a total diva! Haha!

EM: You’ve helped to write songs for superstar artist Kelly Clarkson. What was that experience like and do you feel that writing songs for other artists is something you will continue to do in the future?

JD: I got to be apart of one of Kelly Clarkson’s writing camps in Nashville and it was an experience I’ll never forget. She ultimately passed on the song, but she kept it on hold for awhile. For me, it was just cool that Kelly, one of my biggest heroes, listened to a song with my voice on it.

I definitely want to continue writing songs for other artists. I always find I’m more precious about songs that I want other artists to cut. I know how much my own songs mean to me, so it’s a fun challenge to try to craft something that someone else could feel that passionate about. Jacob Sartorius cut a song I wrote with Sam Ellis, called “Chapstick” and I got to see him sing it in concert about a month ago. It was so surreal seeing how people responded to it- singing along and screaming. To be able to make something that could mean that much to an artist or their fanbase is the dream. So, I totally want to continue trying to do that for more artists.

EM: You released the single “Old School” from your upcoming debut EP, along with a video for the song, on January 26th. I read that the song is an ode to the love you have witnessed between your parents, an “old school” kind of love. Was it always your plan to have your parents be the stars of the song’s video? Was it fun for them to be in the video for the song inspired by them?

JD: ”Old School”‘s music video was SO much fun to film. My parent’s loved the experience. My dad kept saying it was “the best weekend ever”- and I agree. To me, there was no better way to do my first video than to include my family and get to film it in the house I grew up in (which also happened to be the house my dad grew up in and where a lot of the story actually took place). As soon as we started planning out how the video would do, I insisted we tell their story. It’s too good of a story to not put out into the world! Plus, I’m hoping it brings me good luck with me finding a love like theirs. Haha! Hasn’t been the case so far…

EM: I read that with “Old School” you realized you had found the sound you were looking for as an artist. What was the moment like when you made that realization? Did you know instantaneously?

JD: Yes, I think I knew right away that “Old School” was the first song I’d written that really hit the sound I was looking for. Musically, it’s so fun and sounds pop, but also organic and contains a lot of soul elements that I’d grown up falling in love with. Lyrically, it was just a happy love song, which I fear is a bit of a lost art in modern music. I think everything about it was a representation of who I am- an optimistic, fun-loving chick!

EM: You will be releasing your debut EP “To Be The Little Fish” in May. I read that your goals for the EP were to capture the Motown-era music of your childhood but give them a modern twist, combining modern and older influences. Do you feel like you achieved these goals?

JD: Yeah, I believe we achieved that goal. I describe it as a blend between Motown/Soul and the air-tight pop music I grew up on. I wanted to bring a little bit more musicality and chords to modern pop music. I’m hoping everyone agrees with that assessment! I guess only time will tell!

JD: Right now, I’m working on the second single, “Good Boys”. Next week, I’m filming the music video around Nashville and I’m super excited about it. “Good Boys” is a song about how the good guys should win more often. It’s coming out soon, so I’ve been in cover art and music video mode.  Other than that, I’ve been working on booking more shows with my band. My live show has been what I’m most excited about moving forward. I love going to concerts, so planning shows of my own has been a real treat. I’m playing at Exit In, opening for my friend, Devin Dawson, on March 29. I’m super stoked about that- and hopefully booking a longer tour of some kind in the future so I can travel a bit! We’ll see!

Thank you so much for your time! And thank you to anyone taking the time to read it! Much love!