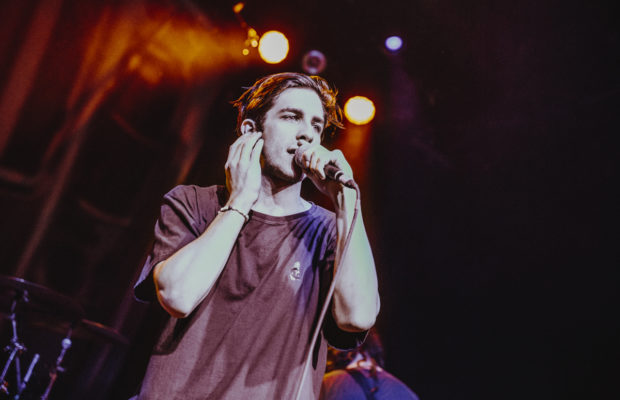 Knuckle Puck with Movements and Homesafe

New York City’s Irving Plaza was packed to the brim on Friday night as the pop punk tour of the century was rolling through the big apple. The venue floor was crowded with dad hats, flannels, black skinny jeans and vans… literally.

Knuckle Puck bassist Ryan Rumchaks’ hometown side project, Homesafe, kicked off the night. I had heard of the band, but never really had the opportunity to listen until I was in the pit, 2 feet away from them. They put on a good show with high energy and lots of crowd interaction that definitely made them one of the more memorable opening bands I’ve seen. I was particularly drawn to the energy of Rumchacks, who stood center stage, often screaming into the microphone while rocking a Cousin It look, with his long hair sweeping over his face and microphone. Homesafe set the bar high for the night, but with a lineup as packed as this one, the following bands had no problem pushing it even harder.

I’ve been a fan of Movements for quite some time, catching them on Warped Tour the past two years. They’re a different kind of pop punk that stands out from the angry, complaining about your ex girlfriend lyricism that we see so often today. While the physical presence of the band was less energetic than Homesafe, the show that they put on was just as strong. Standing in the pit it was hard to move at lead singer, Patrick Frick, would scream into the microphone and then turn it to face the audience as crowdsurfers grabbed for the mic to sing the lyrics. They played a lengthy set that included songs both new and old like “Colourblind”, “Third Degree” and “Kept”. The energy was high and the crowd was impatiently awaiting the arrival of Knuckle Puck.

After multiple set changes and instrument and lighting checks it was finally time. Knuckle Puck was going to grace the stage. After just releasing album number two, I whole heartedly believe that there is nothing that Knuckle Puck can’t do. They blew everyone out of the water with their debut album, setting a new tone in the pop punk genre and with their most recent release, Shapeshifter, they are pushing the boundaries of the pop punk sound. Opening their set with their powerhouse lead singer from the record “Gone”, the crowd erupted in a massive circle pit in the center of the crowd, while fans instantly began climbing on each other to crowd surf their way to the front.

Watching from the balcony above as the energy unfolded beneath me, I was blown away by the performance that Knuckle Puck put on as well as the extreme dedication and passion that their fans have. Their lengthy, hour long set, consisted of songs from a span of their discography including “But Why Would You Care?”, “Pretense”, “Everyone Lies To Me” and “Wait”, before concluding their super sweaty, super passionate and intense set with “Untitled”.

Watching as fans left the venue, merch and dirty flannels in hand there was nothing but sweat and smiles on their faces. There’s just something about the pop punk genre that fosters an insanely loving community and it’s bands like Knuckle Puck that put on such killer shows that remind everyone why music is such a powerful healing tool.