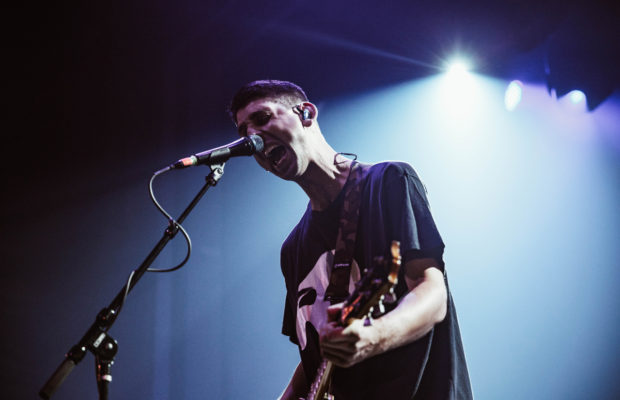 Photos and Words by Jess Williams

I’ve always admired Tigers Jaw and their niche little section of the pop punk industry that they’ve been dominating since they came onto the scene in 2006. Last night, the duo headlined New York City’s Webster Hall in a nearly sold out Grand Ballroom. The band gave the crowd a night to remember with a lengthy 21 song setlist and high energy that never faded throughout the course of the night.

The straight bangs and classic vans were running rampant throughout Webster Hall as opening band Saintseneca took the stage. The five piece rock band from Columbus, Ohio clearly garnered their own fans as people cheered and sang along to the bands songs throughout the night. The sound, which can only be described as that emo alternative sound (all my emo’s out there will know what I’m talking about), was soothing and their poignant lyricism came through front and center. Saintseneca’s set came to an end after nearly 45 minutes and the balloon pieces lined the stage as the crew began to set up for the main act.

Tigers Jaw graced the stage and began their performance with “Follows” from their newest release spin. I’d been waiting for years to see Tigers Jaw perform live and it was finally happening. They are a band with immense talent and passion for what they do and it truly comes through with every second of their performance. Their fans, even more passionate, as the intro to “The Sun” began and the fans were going crazy, shouting out every word. A smile from ear to ear graced 1/2 of Tigers Jaw, Brianna Collins’ face, as she looked out into the crowd, with a massive pit and crowd surfers that were flowing over the barricade every second.

The night was hot. It was sweaty. But it was amazing. Blue and red lights bathed Tigers Jaw in light as they played songs both new and old on their strong setlist including “Nervous Kids”, “Charmer”, “Guardian”, “Plane Vs. Tank Vs. Submarine” and finally, their encore of “Hum”. The Scranton, Pennsylvania based duo really put their hometown on the map and showed that Northeast PA is where the real talent comes from.