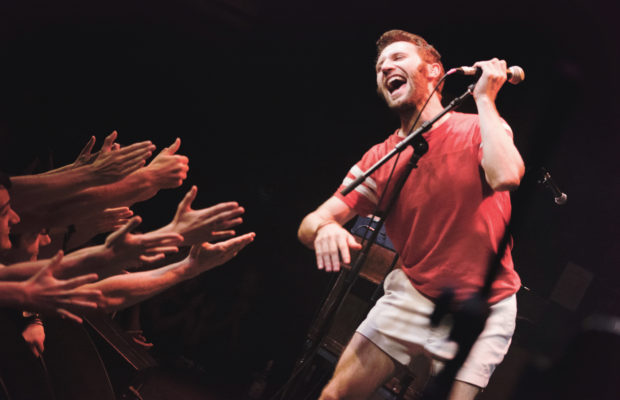 This was to be a debut show in the U.K for Vulpeck (how a German would pronounce wolfpack), and it was sold out. The band had only booked two shows in England and a third was added due to high demand, which also sold out. After a charming opening act by Joey Dosik, Vulfpeck take to the stage dressed in what can only be described as page 132 of a 1977 sports catalogue, the band are greeted by a roaring crowd. They open with ‘Fugue State’, a groovy instrumental number from the E.P of the same name, and as the entire room sings the opening hook back at them, the band can do nothing to conceal their surprise and delight. Afterall, Vulfpeck are supposed to be a relatively unknown band, or so everyone attending the Brooklyn bowl (including the band themselves) in London tonight had thought. From the opening chords it became very clear, this was to be a memorable show indeed.

The band formed in 2011 and have released four E.P’s and an album. They comprise of four very talented multi instrumentalists, all of which are constantly switching roles in the band. Except that is for Joe Dart, an astonishingly talented bass player who is right where he belongs, assuming the lead instrument role of the band, Joe takes the lions share of solos and wows the crowd with lightning fast lines and infectious grooves. During one of these solos, a chant of ‘JOE!’ fills the room as tears across the fretboard of his Fender bass. Tonight Vulpeck would play standout tracks covering their entire back catalogue, plus some unexpected and well executed covers.

The main spokesperson of the band appears to be Theo Katzman, who’s outfit choice from page 132 is a bandana and vest combination. Theo gurns and grimaces as he switches between guitar, drums and vocals, he is very accomplished on each instrument, but his voice is the clincher. Theo is a fairly rugged, slightly weathered man, but has a voice that in no way matches his appearance, his vocal is found mostly in the falsetto register and is sweet, soulful and quite beautiful. As they introduce the first of tonight’s cover versions, he explains that when he first heard the song he thought ‘ah great, this dude sings like a girl, like me’. The song turns out to be a Fleetwood Mac number, sung by Christie McVie, Theo expresses his disappointment and amusement, but he learnt the part anyway, they played it and it was good.

Throughout the show we are treated to a variety of special guest musicians, including vocalist Antwaun Stanley, a regular at Vulfpecks shows. Each guest is welcomed onto the stage like an old friend, smiles and hugs are exchanged and you can tell that there is a lot of love up on that little stage. Being at a Vulpeck show is more like being a fly on the wall as they hang out and jam, not to say they don’t put on a good show, quite the opposite infact, but the atmosphere is relaxed and everyone just looks like they’re having fun, it’s a joy to watch, you almost feel part of something special, and in some respects, you are. Audience participation is a staple for Vulfpeck, and they don’t do things by halves. As seen in many of their live shows, the band attempt a tongue twisting three part harmony for the song ‘Back Pocket’, Theo Katzman, splits the crowd into three sections, teaching each section they’re own part, and it works! A huge three part harmony performed by Brooklyn Bowls 1,000 capacity crowd, not something that happens at every gig. As the night draws to a close, everyone in the room is left wanting more, a fantastic and charismatic live band walk from the stage, perhaps as blown away as the audience they have just performed for.