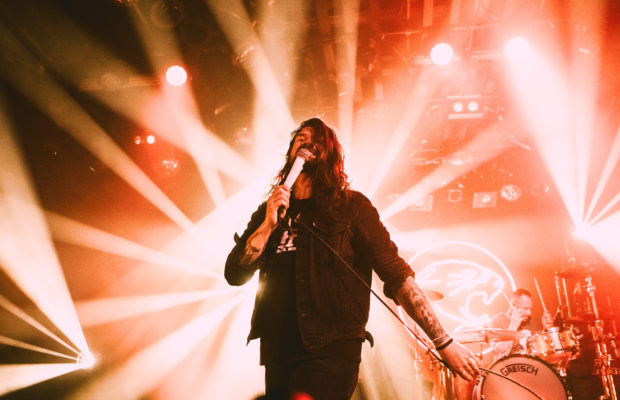 Taking Back Sunday with The Maine

In celebration of their 20th anniversary, Taking Back Sunday have set out on a year-long worldwide tour. We caught them at their sold-out Vancouver show (the first of two dates in the city), with support from The Maine.

Hitting the stage to Blur’s Song 2, the boys of The Maine got the evening off to a rip-roaring start. Having just released their seventh album, You Are OK, on March 29th, there was no shortage of options for what to include in their setlist. However, they still managed to please almost every generation of fan in the building with an eleven-song set that perfectly mixed together with the new hits with the old ones. As they jumped between songs like Bad Behaviour, Numb Without You, and Girls Do What They Want (which was probably the biggest hit of the night so far) the energy put out by each of the band members seemed to increase more and more. It was clear by the end of their set that The Maine is one of those bands that even if you haven’t kept up with them over the last twelve years, you will know at least a couple songs and be able to have a good jam session.

Finally, it was time for legends Taking Back Sunday to hit the stage. Getting right down to business, they began the musical journey through their album Tell All Your Friends, playing it in its entirety, as the whole room screamed every word along with them. Cities like Vancouver, which have two show dates back-to-back, are being treated to an additional full album set each night from either Where You Want To Be or Louder Now, decided by a specially made coin. Bringing Pat Kirch out from The Maine to do the coin toss, it was decided that the audience that night would be hearing Louder Now, to which a roar went up from the crowd.

Adam Lazzara (vocals) put on an impressive show the entire night, sharing stories of each of the songs and how they came to be, in between insane vocal performances and cool mic tricks. It was made very clear, very early on that this was not just a celebration of the band and their achievements, but the loyal fans that have stuck with them throughout the last twenty years as they evolved from an emo band to rock band that refuses to play by the rules of genre.

The band is currently finishing up the first leg of the worldwide tour on the western side of North America, before heading over to the UK, Europe, and back to North America for the second leg. This is a must-see show, even if all you know is MakeDamnSure.