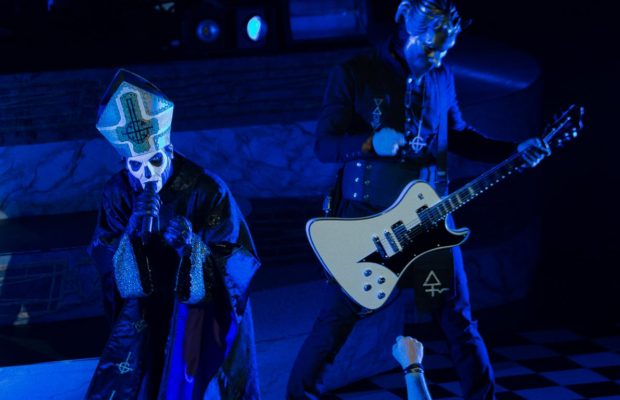 Swedish heavy metal band Ghost, who are in the midst of their Popestar tour, made a stop in Louisville, Ky recently.  Although they are currently touring with Iron Maiden, they made a stop in Louisville for a headlining show, performing to a packed venue of enthusiastic fans.  Ghost is a very theatrical band, with Tobias Forge performing as Papa Emeritus III, a demonic anti-pope, clothed in a black clergy robe, a mitre and skull face paint.  His band mates are known as the faceless ghouls, donned in almost identical masks and all black clothing, obscuring their identities.  As the lights dimmed, fans started cheering in anticipation of Ghost taking the stage.  The show began with the song Square Hammer, with the ghouls taking the stage first, followed by Papa Emeritus III, who made his grand entrance towards the back of the stage in a plume of smoke. Ghost is a very lively band on stage and incredibly interactive with the crowd.  Forge worked the entire stage, making sure to interact with both sides of the crowd.  The bassist and guitarists often stood on raised platforms at the front of the stage, playing directly to the crowd, while the drummer and keyboard player were perched on raised platforms towards the back of the stage.  The band performed many of the hits, such as From The Pinnacle To The Pit, Devil Church and Cirice, during which Forge knelt at the front of the stage and took a fan’s hand, holding it to his heart for a few verses. Although Forge began the show in his robe, mitre and skull face paint, after a few songs he exited the stage and came back wearing a long black dress coat over a white dress shirt and black pants, with his black hair slicked back.  He performed the rest of the set is that attire.  Towards the end of the set, the band performed their song Mummy Dust, in which confetti shot out of cannons and into the crowd.  It was a spectacular sight! The show ended after the band performed a short encore, leaving their fans reveling in an amazing evening!