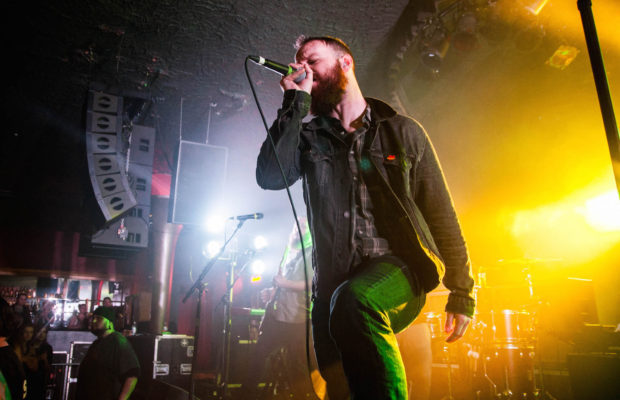 Swinging through Seattle on November 2nd was one of the most highly talked about, not to mention STACKED, tours going through North America this fall. The Wonder Years, Real Friends, Knuckle Puck, Seaway, and Moose Blood treated Seattle to one of the most high energy performances the city has seen in a long time, die hard fans waiting in line hours before the doors even opened.

Kicking off the night was Canadian band Seaway. Playing tracks off of their latest album, Colourblind, it’s hard to call this band an opener when the majority of the crowd in attendance that night knew the words to their songs, delivering almost as much energy as they gave to the other bands on the bill that night. Playing tracks like “Trick (So Sweet)”, “Best Mistake”, and closing with “Airhead”, Seaway delivered a high energy performance that got the crowd ready for the next four bands playing that night.

Hailing from the UK, if you haven’t heard of Moose Blood, now is the time to get on the bandwagon. With incredibly written and well-composed tracks, Moose Blood delivers a refreshing new sound to the alternative scene we haven’t quite heard before. With their new album, Blush, having been released this past summer, the band played tracks off of both their new release and previous album, I’ll Keep You In My Mind, From Time To Time, offering a performance slightly different from the other bands on the bill. While their music falls more on the alternative-rock spectrum than the pop punk side of things, fans were into their set from beginning to finish. Playing hits like “Honey”, “Glow”, and closing their set with “Knuckles”, Moose Blood’s a band that translates from recording studio to live shows seamlessly, making them an act that should be on everyone’s radar.

Knuckle Puck and Seattle have a very strong relationship, vocalist Joe Taylor even saying during their performance that night that Seattle always brings the most energy and is one of their favorite cities to tour through. Playing a total of eight songs during their set, Knuckle Puck wanted to make every single moment count as they opened with “Transparency”, a track off of their 2014 EP, While I Stay Secluded. With fans crowd surfing over the barricade faster than could be counted, it was clear that Seattle fans had been anticipating when they would see Knuckle Puck again for a long time. Playing tracks like “No Good”, a fan favorite that Knuckle Puck mashed up with Smash Mouth’s “All Star”, and “Evergreen”, their latest single off of Copacetic, that features vocals from Dan Lambton of Real Friends, which he joined Knuckle Puck onstage for that night, Knuckle Puck delivered one of the most energy-fueled performances the pop punk scene has seen in a while.

Closing the night with “Untitled”, a song that left the audience singing Knuckle Puck’s signature lyrics “everything is copacetic”, and “Pretense”, it is clear that no matter where Knuckle Puck falls on the lineup of a tour, whether supporting or headlining, they give everything they have into their performance, making it memorable for everyone that witnesses it.

Delivering thirteen songs, Real Friends proved why they are currently one of the most popular pop punk acts in the scene right now. Playing a mix of tracks off of their previous albums, they opened up their set with “I Don’t Love You Anymore” and “I Think I’m Moving Forward”, vocalist Dan Lambton and bassist Kyle Fasel interacting with the crowd the most throughout the set, continuously keeping spirits and energy high. Highlights during their set included “Mess”, the track the band just released a music video for, and “Empty Picture Frames”, two moments in the set where the crowd overpowered Lambton’s vocals with their own singing, something that Lambton and the rest of the band encouraged as Lambton held his microphone out to them to take the songs away. Closing their set with “Last Night In My Car”, undoubtedly one of Real Friend’s biggest songs to date off of 2013’s Put Yourself Back Together, it was evident in the crowd that night that Real Friends will always have an electric and passionate fanbase to come back to in Seattle.

The Wonder Years took to the stage just a little after ten that night, fans clearly not worn out quite yet from the four bands that played earlier because as soon as the members walked onstage, an explosion of screams emerged from the crowd, warmly greeting each member in The Wonder Years. Opening up with “No Closer To Heaven”, the stage was lowly lit as the vocals of Dan “Soupy” Campbell rang throughout the venue, the anticipation growing throughout the audience with each second. Once the song ended and the band kicked in with “Local Man Ruins Everything”, fans let go of the energy they had been conserving throughout the night, fans soaring above the crowd as a huge mosh pit opened up in the middle of the floor. Playing tracks like “Cigarettes & Saints”, “My Last Semester”, and “The Devil In My Bloodstream”, The Wonder Years delivered a hard-hitting, jam packed set list of nineteen songs that did not disappoint a single fan in the room that night.

Closing out the night with “Came Out Swinging”, one of their most popular tracks to date and the opening song to 2011’s Suburbia I’ve Given You All and Now I’m Nothing, they ended the night on a high, the crowd taking control of most of the song with their singing and interaction with the band.

For those that may have attended the tour for just one band, it’s easy to assume that they left as new fans of one of the other bands playing that night. As this tour shows, the pop punk scene is thriving more than ever and the bands emerging from this scene are capable of far more than just writing quality songs.