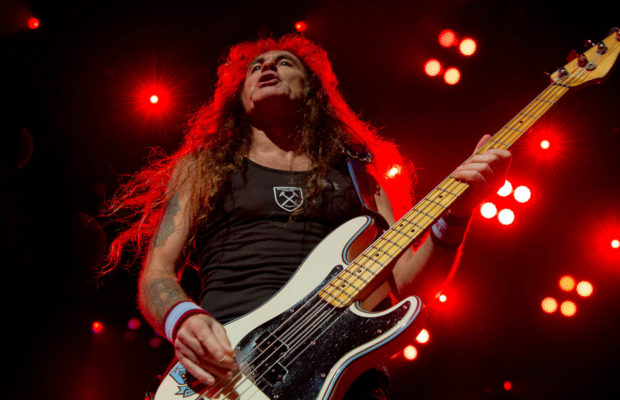 Iconic English heavy metal band Iron Maiden brought their Book Of Souls tour to Nashville recently to perform to a sold out crowd of passionate and eager fans.  Lining up at the arena hours before doors were scheduled to open, many of the fans were willing to wait for hours in the blazing heat in their determination to make it to the barricade.  Having seen Iron Maiden several times in past years, one thing I can say for sure is that they have fiercely loyal fans who help the band sell out arena tours year after year.  While some fans are new and young, there are many that are older and have followed Iron Maiden since the beginning of their career.

There are many bands that have a specific song that plays just before going onstage, allowing the crowd to know that the show is about to start.  For Iron Maiden that song is the British hard rock band UFO’s hit Doctor Doctor.  As that song began you could feel the excitement in the air as the crowd started cheering in anticipation of the show to come.  The band opened with If Eternity Should Fail, with Bruce Dickinson standing behind a cauldron on a dark stage, the white smoke billowing out to eerily illuminate his face.  The theme of the stage was ancient Mayan lands, with stone-looking temples, tiki torches and a large u-shaped platform that allowed Bruce to run freely around the sides and back of the stage.  There was a screen at the back of the stage that showed a rotating cast of their mascot Eddie’s many incarnations throughout the years.  Although Bruce, Adrian, Steve, Nicko, Dave and Janick are well into their 50’s and 60’s, you would never know it by watching them perform.  They moved around the stage with a tremendous amount of energy for their entire set, including plenty of leg kicks from Janick Gers!  While Bruce split his time on the u-shaped platform and the floor of the stage, the rest of the band stayed on the floor of the stage exclusively, except Nicko, who was behind his drum kit on a shorter platform that sat in front of the u-shaped platform. Bruce, Adrian, Steve, Dave and Janick were constantly moving from one side of the stage to the other, often sharing moments together, giving both sides of the crowd an equal amount of time with each member. When he wasn’t singing into it, Bruce used his microphone as a prop, hoisting it in the air and spinning it around, and often holding it at an almost vertical angle as he sang into it.

One of my favorite parts of an Iron Maiden concert is seeing the masks and props that Bruce uses and wears throughout the set, as well as the appearance of a life-size Eddie that the band interacts with.  During Death or Glory Bruce donned a monkey mask while “climbing like a monkey” and passing out bananas to a couple of his band mates.  Seven songs into the set, the band played their classic hit The Trooper, in which Bruce, clad in his signature Revolutionary War-style red jacket, ran all around his platform while waving the British flag.  During The Book Of Souls, a life size Eddie walked around the stage while mock-battling various members of the band.  Eddie met his demise at the hands of Bruce, who ripped out Eddie’s still beating heart, squeezed blood from it, and threw it into the crowd, thus causing Eddie to leave the stage in defeat.  Next they played one of my favorites, Fear Of The Dark, a song that always gives me the chills when I see it live.  Changing the stage lighting to a more mellow and almost ethereal look, they had the entire arena singing along to what I am sure is a favorite of many of the fans. The band ended their pre-encore set with their self titled classic, Iron Maiden, featuring one of the most anticipated and iconic parts of any Maiden show…the appearance of a gigantic Eddie looming over the back of the stage!  The guys left the stage in a roar of cheers and applause, only to return moments later for three more songs.  Starting their encore with The Number of The Beast, there was an enormous beast prop with the head, torso and horns on the side of the stage, as well as flames on the screen at the back of the stage.  Bruce then took the opportunity to speak a bit to the crowd, telling them that despite the mess that the world is in right now and despite our differences, we were all there for a common purpose…to see Iron Maiden!  He pointed out that music is wonderful in that it unifies people.  They forget about their differences, if only for a couple of hours, and enjoy the music.  It was the perfect lead-in to Blood Brothers, one of the hits off of their album Brave New World.  They ended the show with one of my personal favorites, Wasted Years.  After the last note was sung and the band exited the stage, their exit song, Always Look On The Bright Side Of Life (from Monty Python) started playing to let the crowd know that the show was indeed over.  Iron Maiden is one of my all time favorite bands, and getting to see them live is always an amazing privilege, this evening being no exception.  If one thing is certain, it’s that Iron Maiden will always leave you wanting more!