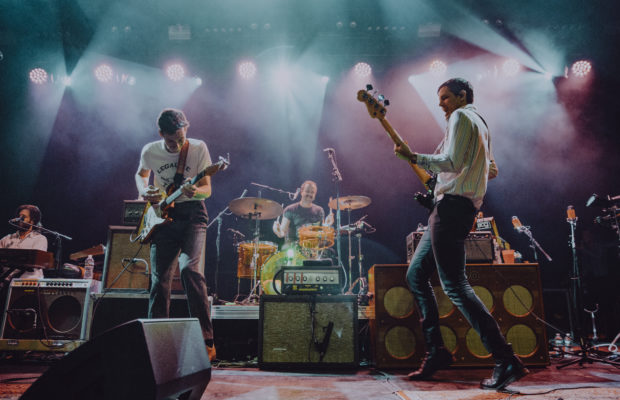 The alternative rock trio brought their beach infused, sunburnt sounds to bring the crowd a small taste of some summer warmth on the chilled February night. A brisk 15 minute set was still the set of a lifetime for Modern Love Child, who shared that they were ecstatic to be playing on the same tour as their musical idols. It was hard to pinpoint a song that wasn’t about Los Angeles in the band’s set but who is complaining when they sound that great? Though they are up and coming, it’s strongly suggested to hop on the band wagon now before they catch the big wave and blow up.

A quick set switch and the crowd’s engines were rearing to go for Ben Kweller. “Something’s wrong with my guitar pedal,” Kweller stated before opening his set. He strummed his guitar slightly and let out a gnarly riff to which the crowd roared. “Fuck it dude! I guess we’re just gonna play dirty this whole set! Are we ready to play dirty?” Kweller shouted into the crowd. Judging from the screams, hoots and hollers that were coming from the crowd, everyone was more than ready to ride dirty. The riffs, heavy bass lines and hair flips were frequent during Kweller’s set and it was truly a treat to watch such a legend perform.

The crowd got their fair share of rock n roll out of the way before settling into some more soothing light rock sounds with Houndmouth. Hailing from New Albany, Indiana, Houndmouth graced the stage with their effervescent midwestern charm. The band took us back by opening their set with “Ludlow” off their 2013 release From The Hills Below The City. However, their lengthy set of 14 songs, plus a 3 song encore, gave the fans more than what they expected. The setlist featured songs from across the bands discography, which was sure to please fans of all ranges in attendance that night.

It was a real treat to watch the trio perform some of their hit songs like “Sedona” and “Darlin'”, while the crowd raised their beers and sang along, swaying to the beat of the song. Rarely do I ever classify a concert as peaceful, but I truly don’t know how else to describe the emotions I was feeling, standing at the back of Brooklyn Steel, watching three guys from the Midwest complete captivate hundreds of city slicks. It surely was a night to remember!