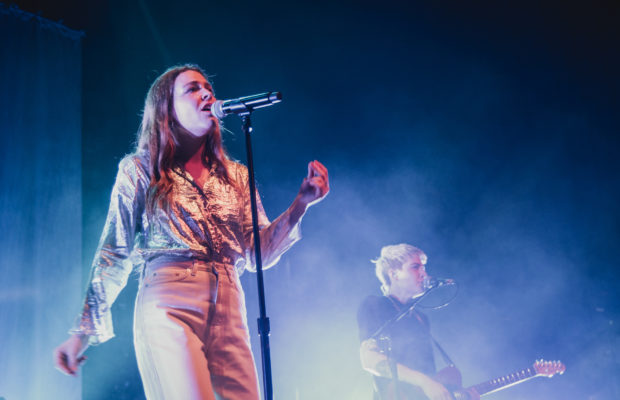 Last Sunday, Maggie Rogers played a sold-out show at The Pageant in St. Louis, MO, as part of her Heard It In A Past Life World Tour. Along with her, she brought along R&B musician Melanie Faye to open the show.

Often described as a lyrical guitarist, Melanie Faye kicked off the show with several instrumental songs including only her and her guitar. Known for her viral videos, the crowd ooh’ed-and-ahh’ed over her ability to articulate the melody line of a song with just a guitar. In this way, Faye reminds me of John Mayer and Stevie Ray Vaughn who often squawk away on their guitars with the ability to convey emotion, meaning, and energy without words. Eventually, Faye took to the mic for an equally astonishing showcase of light, feathery vocals to write home about.

After Faye’s fitting start to the night, a 30-minute intermission gave fans time to mingle amongst each other and grab a drink. The intermission ended with a loud crowd sing-a-long to Abba’s “Dancing Queen” as Maggie Rogers’ accompanying band took the stage. Kicking off her set with “Give a Little,” Maggie Rogers took to the stage with all smiles as the crowd joined with her to sing the song just as loud as they belted Abba.

With her 70’s-esque shimmer, Rogers traipsed about the stage for a full 90 minutes in celebration of her debut album Heard It In a Past Life that dropped earlier this year. High points in her set included bringing Melanie Faye back out for a rendition of “Alaska”; a venue-wide dance party to upbeat, yet drab-written “Overnight”; and closing out the show with her smash hit “Fallingwater.”

Maggie Rogers’ Heard It In A Past Life World Tour continues through October 2019 and travels from coast to coast of the US, Europe, and Australia. For more information, visit Maggie’s website.