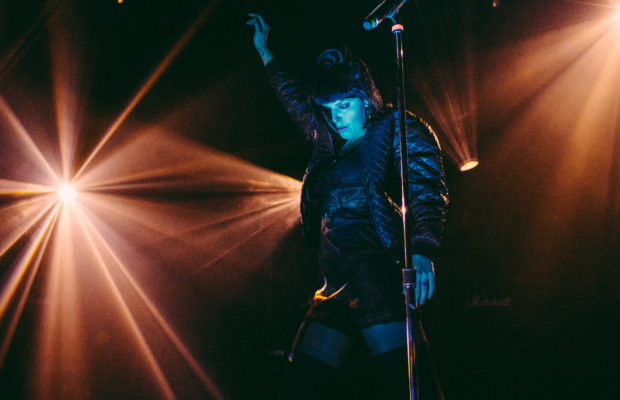 Last week, pop/thrash duo Sleigh Bells brought their tour to Chicago and played for an amped up crowd at the Metro. Fronted by vocalist and Mad Max doppelganger, Alexis Krauss, the band roared through songs from all four of their studio albums, including their most recent release, Jessica Rabbit. The album was released four months ago to critical acclaim and entered the Billboard charts in the top 150. Praised for their ability to blend hardcore metal sounds with soft and coy vocals, Sleigh Bells have been turning heads (and ears) for the past nine years.

Fresh from SXSW, Tunde Olaniran opened for Sleigh Bells in Chicago and gave the audience a reason to throw both their hands in the air. The Nigerian-American performance artist had giant banners on either side of the stage indicating that his show was a safe space; all were welcome, and no shaming would be tolerated. Tunde lives in Flint, Michigan and works for Planned Parenthood when he’s not touring. His music is an eclectic vibe of hip hop and dance with a soulful and deep vein running through each of his songs. Accompanied by his two backup dancers/performance artists, Tunde had all eyes on him, and his music made a lasting impression on the crowd.

When it was time for Sleigh Bells, the room was pitch black, save for one or two bursts of bright blue light. Guitarist and songwriter Derek Miller’s silhouette swayed as Alexis Krauss jumped and dove from one side of the room to the other. Leaning in to grab fans’ hands, she eventually jumped off the stage to be carried through the Metro by the crowd (her signature move). By the end of the show, the audience was as sweaty and exhausted as the band. If you’ve never been to a Sleigh Bells show, be warned: audience participation is not only encouraged, but impossible to resist.