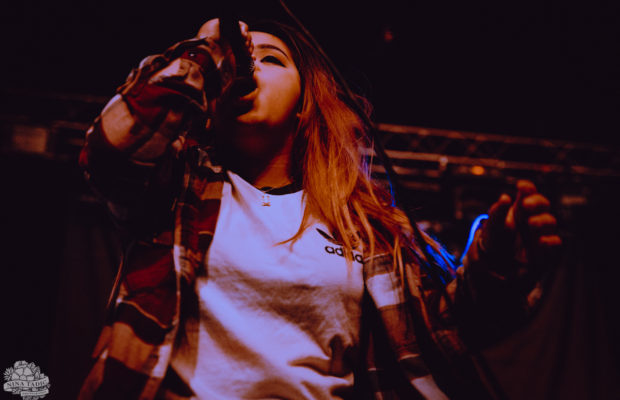 Bad Seed Rising may be a young bunch, but that does not stop them from putting on a show to remember. The band was signed last year to Roadrunner Records, making them the youngest band on the label. They have since been touring almost nonstop, both in support of larger bands, and with some smaller ones as well. Recently, they made a stop on their tour with Islander and The Funeral Portrait, and performed a very intimate set at Big Shots in Valparaiso, Indiana.
Though the performance was on a Thursday night, and therefore not a packed out show, it was still memorable. Vocalist Francheska Pastor hit every note on the head, and had no problem interacting with the crowd. The entire band was bursting with energy for their entire set, and it was incredible to watch. They each did a very nice job at interacting well with one another, and their movements were almost gravitational around one another. A band that can interact with one another and with their fans is a band that will grow, so do not be surprised if you see Bad Seed Rising explode this year.

Photos and words by Nina Tadic