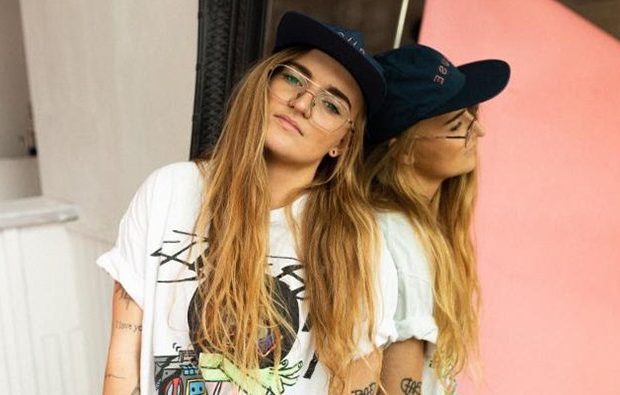 The feeling of falling in love is something that everyone longs for. It is one of the scariest and most terrifying yet greatest and strongest feelings that we as human beings can feel. Australian singer-songwriter, G-Flip, shares her experience with love on her debut record, out today, titled About Us. The record details an emotionally raw and powerful story of her current relationship.

G-Flip found herself drawn to music at a very young age, after her uncle gifted her a tiny drum kit for her ninth birthday. “That was the key to my whole life,” G-Flip says definitively. She picked up various instruments throughout high school including piano and guitar and began playing in a multitude of different bands. After graduating from university with a degree in music, concentrating on drums, G-Flip found herself touring across North America with an Australian indie rock band, but after the band dismantled, she found herself wanting more. After deciding to pursue a solo career, G-Flip huddled into isolation to begin the songwriting process, but was simultaneously going through, what felt like at the time, the final stage of a tumultuous relationship with her girlfriend.

In 2017, G-Flip wrote and produced her debut breakthrough single, “About You” in her bedroom. “I was in this bedroom when I put the song on Triple J Unearthed. And then it blew up that day”, says G-Flip. The single saw praise from a multitude of publications and landed G-Flip sold out shows across Australia and a few festival dates in the States!

After creating quite the name for herself off of a single EP, G-Flip has delivered fans with what has strong contention of being one of the top records of the year. About Us features 10 tracks, a culmination of all her previously released singles as well as four brand new songs. The record opens with “Lover”, where G-Flip wholeheartedly confesses her love and longing to be more than just friends. Two previously released singles follow, “I Am Not Afraid” and “Drink Too Much”.

G-Flip squints at the morning after drinking too much on “Morning”, a sweet love song about wanting to wake up next to your special person — and nobody else — every morning. “I actually woke up and sang the chorus–“Ain’t nobody else that I want in the morning”–into my phone, while sitting on the end of my bed. I had to work out if it was a song that I’d already heard or my own song!” says G-Flip.

About Us, as a whole, details one of the rawest and most human love stories we have seen in a while. G-Flip never shies away from the honest truth that love hurts and love is hard but love is so worth it in the end. On “Stupid”, G-Flip details the sometimes crazy aspects of relationships — the silly arguments and stupid grudges — but knows that deep down it’s all love.

Revisiting the highs of relationships, as heard in “About You” and “Morning”, and the lows of relationships, like “Drink Too Much” and “Stupid”, has given G-Flip valuable respective on her past and allowed her to create the masterpiece that is her debut record. “I was so broken. For a year I isolated myself so all I had, my only friend, was my thoughts.”, says G-Flip. About Us concludes with the touching track “2 Million.” On the closing track, G-Flip acknowledges the strange reality of leaving a capsule of her work detailing the love between her and her partner to be consumed by strangers for many years after they are both gone.

The story of G-Flip is one of extreme talent, passion and drive. G-Flip truly personifies the motto of not giving up because better things are just around the corner. G-Flip’s radiant and beautiful personality shines through in everything she does and her talent and skills take center stage on this absolutely stunning debut record. Congratulations, G!

I Am Not Afraid