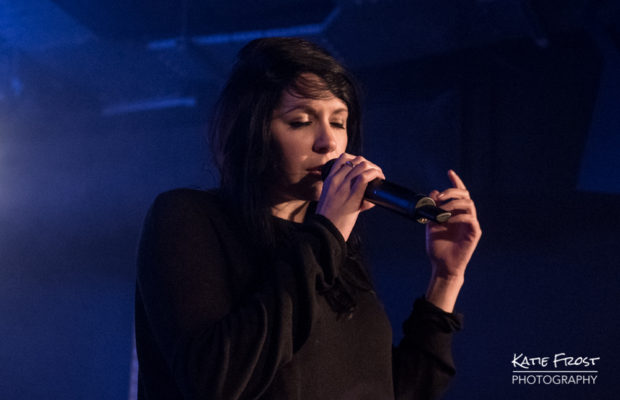 K.Flay (Kristine Flaherty) is an American singer-songwriter who has had growing success on this side of the pond following tours with electro-rock singer-songwriter Lights in early 2015, and alt-rock band PVRIS in April 2016. In September last year I saw her play a cracking headline show at a packed Hoxton Square Bar + Kitchen, and it has been great to see her fan-base grow over the past couple of years.

When this show was originally announced it sold out in record time, and an additional show was added for 27 June. As the clock struck 7pm fans started to queue to get into the 400-capacity venue and were let in shortly afterwards. The keenest made their way straight to the front to get the best view of the stage, whilst others opted to head to the bar or merch table.

This was my first time seeing a show this venue since its refurb and re-brand. Previously called The Barfly and one of London’s most famous and much-loved small music venues, it is now known as Camden Assembly and has been extensively refurbished. I personally feel that some of the crooked charm of the old venue has been lost, but it is still a good small live music venue.

First on stage at 8pm were Gloucestershire four-piece indie / alt-rock band Mirror Fury. Vocalist Carina had a wonderful voice that really drew the audience in, and their performance was very engaging. Their songs were full of sincere emotion, and one of the stand-out tracks for me was “Skinfull” – a heart-felt ballad about losing a loved one to addition.

At 9pm K.Flay took to the stage, to a huge cheer from the buzzing crowd. Opening with “Giver” from her recently released album Every Where Is Somewhere (released in April 2017), Kristine looked very happy and content on stage. She describes her music as “a version of indie hip-hop, mixed with electronics, mixed with me head-banging” and I think that sums up her style very well. I mainly go to rock / metal shows but for me there was something about K.Flay that caught my attention. Perhaps it is the honesty of her lyrics or the way she bounces around the stage, but she definitely puts her heart and soul into her live performances.

As well as tracks from Every Where Is Somewhere, she also played crowd favourites from her previous releases, including “Make Me Fade” from her 2014 debut album Life As A Dog, “Blood In The Cut” from her 2015 Crush Me EP, and non-album single “FML” – which is always a crowd favourite!

Mid-way through her set it transpired that the girl up on stage was celebrating a birthday.

Kristine looked full of joy (and also a little bashful) as guitarist Josh lead the crowd in a rendition of “Happy Birthday” before they continued with the show.

K.Flay is a great artist and is definitely worth seeing if she comes to a town near you. She is set to support Imagine Dragons on the US leg of their Evolve tour, which begins in Phoenix on 26 September. For more information check out her website: www.kflay.com

Set List:
Giver
Can’t Sleep
Dreamers
Hollywood Forever
Black Wave
Wishing It Was You
The President Has A Sex Tape
The Cops
You Felt Right
High Enough
It’s Strange (Louis The Child cover)
Another Round
FML
Blood In The Cut
Mean It
Make Me Fade