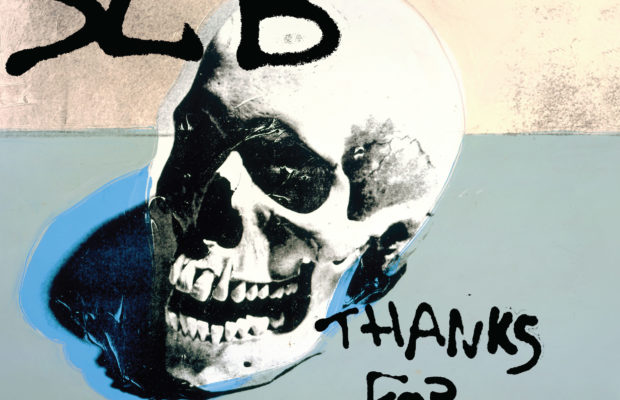 One cannot hold a conversation about pop rock without mentioning household names Third Eye Blind (current lineup being vocalist/guitarist Stephan Jenkins, drummer Brad Hargreaves, guitarist Kryz Reid, keyboardist Alex Kopp and bassist Alex LeCavalier). Their 1997 self-titled debut album skyrocketed them to success, boasting widely-known singles “Semi-Charmed Life” and “Jumper”, and have crafted a sound unique to them and them alone through the slew of records and EPs that have been released since.

Thanks for Everything is Third Eye Blind’s latest offering, a 7-track EP of all cover songs. The band certainly delivers on this interesting approach, covering tracks ranging in genre from Queens of the Stone Age to Bon Iver and even Tim Buckley, and making for a very fun listen for those looking for their fix of 90s-flavored rock n’ roll.

“10” opens the album, a cover of Oakland, California rock outfit Happy Diving. The warm guitar distortion and summery garage-rock overtones of the track is a solid attention-getter to set the tone of the EP, with a sound that is still unmistakably Third Eye Blind. “Fuck Forever” is a foray into the English indie rock scene as a cover of Babyshambles, staying true to the influence of that scene but, similarly to the prior track, adding TEB’s unique sound.

The band goes into an impressive array of different genres and styles with their covers; “Parade”, a cover of the electronic-heavy solo artist Santigold’s “This Isn’t Our Parade”, sees poppy keyboards and synthesizers together with shimmering guitar riffs that make for something unexpected and very entertaining. “Song of the Siren” is a cover of the classic acoustic-driven songwriter Tim Buckley, dialing back the thus-far upbeat energy of the EP a bit with a chilled-out departure from the rest of the release.

“Joke”, a cover of the band Chastity Belt, has a driving bassline, atmospheric guitars and reverb-heavy vocals from Jenkins that covers the “indie pop” base very well; a sound very indicative of how well Third Eye Blind has been able to change with the times. “In The Fade”, a Queens of the Stone Age cut, has a similar vibe about it; an interesting take on one of the more modern torchbearers of the rock n’ roll scene.

It’s doubtful that many expected a Bon Iver cover to be what closes this EP, but that’s exactly the case with “Blood Bank”. The band uses slow, mesmerizing melodies to translate the sound of the widely-known folk group extremely well, providing a somber yet impactful conclusion to Thanks for Everything. There’s something for all sorts of listeners with this EP, with the band calling back to the familiar 90s sound they’ve coined so well, as well as approaching the newer nuances and sweeping sounds of indie rock/pop. Thanks for Everything is a very fun listen that will catch many off guard in the best way possible.