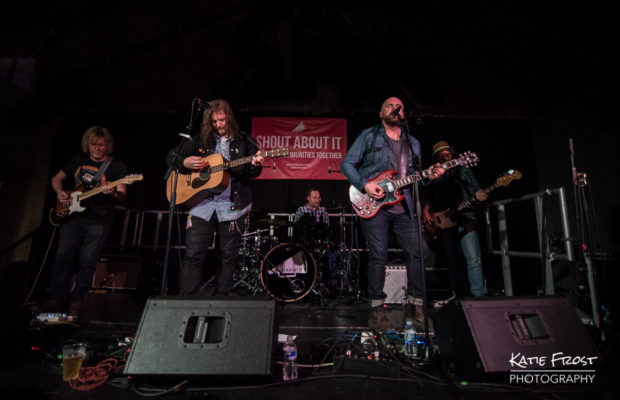 Shout About It Live Festival 2018

Shout About It Live is a hybrid festival bringing live music and gig photography together, and this is it’s second year. The festival is the brainchild of freelance photographer Georgia Flynn who set up Shout About It in 2017 with the aim to create a platform for photographers, creatives and musicians to showcase their work and build contacts across the industry. Shout About It Live not only includes an awesome mix of music from talented bands and emerging artists, but also includes an exhibition of gig photography from photographers from all around the world, providing an inspirational space for photographers – amateurs and professionals alike – to capture the live bands taking part and share their knowledge and expertise with others. When the opportunity arose to exhibit my work at Shout About It Live I leapt at the chance, and I also could not wait to head along to the festival to not only meet fellow music photographers, but check out some awesome new bands / artists.

On Friday I hopped on a train from London to Liverpool for the the festival launch party, eager to meet some of the other music photographers who were exhibiting at this year’s festival. Constellations is a fantastic warehouse-style venue that whose main-space ceiling was adorned with lanterns and a gently rotating glitterball. Along one side of the room were a series of boards displaying the work of music photographers, and at the far end of the space was the stage. This special launch party included live music performances from Scarlet, Shamona, Luna Rose and Melinda Ortner, as well as serving as a private view of the exhibition. There was an excellent atmosphere in the room and it was the perfect start to the festival!

Saturday was the main day of the festival, with fourteen live bands playing the Shout About It Live stage from 12pm until 11pm. There was a great variety musical styles with a predominantly alt-rock / indie vibe. As someone who mainly photographs and attends metal gigs this was a great opportunity for me to broaden my horizons and enjoy listening to and photographing different musical styles. Some of the stand-out bands for me on the Saturday were Tabitha Jade whose high-energy performance and hip-hop infused soul sound went down incredibly well with the crowd, Brothers of Mine who had a great alt-rock sound, The Buffalo Riot with their passionately-delivered alt-indie tracks, Himalayas who were full of attitude and are surely destined for great things, and headliners Rews – who I had been looking forward to seeing for months. Alt-pop-rock duo Rews blew everyone away with their high-energy performance and, despite there being just two of them on the stage, their catchy tunes filled the entire room. Was a brilliant end to the first full day of Shout About It Live!

Sundays are for chilling, and the line-up of thirteen largely acoustic bands / artists for this final day of the festival was the perfect for doing just that. There was a brilliant vibe in the venue from the very start and, just like the day before, I discovered some wonderful new bands including Mike West with wonderfully gravelly yet bluesy voice, the insanely-talented Eleanor Nelly, and the mesmerising Novusolis who had travelled all the way from Canada to play the festival. Closing the festival was singer/songwriter Top Speight, who had travelled all the way from London to Liverpool in a black cab! The most magical moment of the evening for me was when Tom stepped off the stage and into the crowd to perform a song completely unplugged in the centre of the audience, with tiny sparkles of light from the mirror-ball gently twinkling around the room. I couldn’t have imagined a more perfect end to a wonderful weekend.

Huge thanks to Georgia and everyone else who was involved in putting on the festival – I had a fantastic time!