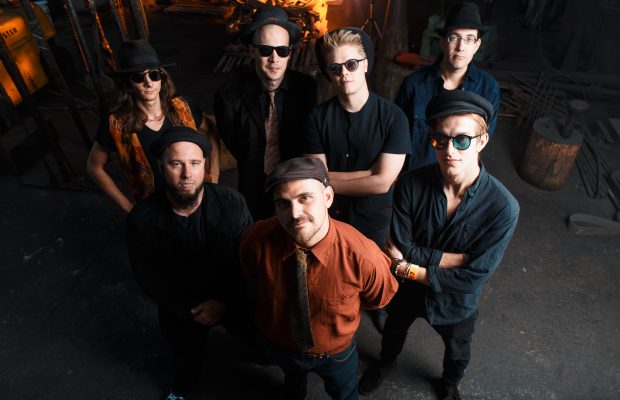 Crimson House is multi genre gypsy rock band that combines several styles including ska, Afro blues, hip hop, blues & rock. Originally based from Cape town, South Africa, the band is comprised of Riaan Smit (guitar/vocals), Nick Becker (alto sax), Arno van Zyl (lead guitar/banjo), Christoph de Chavonnes Vrugt (drums), Jacques Jansen van Rensburg (bass) and Gareth Harvey (baritone sax). They have become a festival & club favourite with their high energy interactive live performances becoming that of legends. They formed in 2010 and have since released 4 studio albums, with a collection of charts hitting tracks along the way.  The band initially begun as a bluegrass duo and by 2012 as a high octane blues quartet. The group toured as Crimson House Blues and had released two albums under the name, Smoke Dust & Whisky (2012) featuring the cult hit “Breaking Down Low”, and Red Shack Rock (2013) featuring “Aphrodite” & “Pindrop Circle”. They dropped the “blues” in their name and released “Come Alive” (2015) which featured 16 songs with the addition of Nick Becker & Gareth Harvey as the newly added horn section that would change their sound forever.  After 2015, the group then featured as the band in a cabaret circus called “Trash Cabaret” in which they adopted a newfound love for gypsy music to the likes of Gorgol Bordello and Balkan Beat Box. This newfound love of offbeat gypsy influence lead the group to establish a new direction in their music and thus has begun the new journey in the making of Bounceology, their 4th Studio album.

Today sees the release of Bounceology.  Crimson House wrote their latest album Bounceology while on permanent tour around South Africa, inspired directly from South African musical acts surrounding the ever-burgeoning music festival scene. The band recorded the album with Antonio Cencherli of V-Lab productions at SoundCast studios in Cape town and it was mastered by Simon “Fuzzy” Ratcliffe of Sound & Motion studios.  “We are so excited about the Bounceology album.  We put so much of ourselves into it and it really shows in the music.  It’s a real turning point for us in how we have developed as a band and musicians”, says Smit.

Amid a haze of music festivals around Southern Africa, a sound was born from the dust and mud of boots stomped from dusk until dawn. Fueled by souls set alight, released into the wild-eyed dream of a moment unlike any that came before it. Inspired by the people, the chants, the community, the journey, and the joy of coming together in song and becoming closer to your fellow human more than ever before. Bounceology is the manifestation of a group of friends, so motivated to be the catalyst of human connection, to create the songs, the rhythms and the stories that can unite people, to remind us all why we are so much the same. This group of friends who couldn’t be more different from each other, created music together that has its own combined identity greater than the sum of all its parts, the spirit of togetherness.  Songs such as “Mama Land” tell the story of a yearning to come home to the land of your birth, “Unicorns” gives the listener permission to be themselves and “Medicine” speaks of love as the cure to all ailments.  Each song on the album holding a message you can take home.  Songwriter and front man Riaan Smit collaborated with incredible musical artists such as violin virtuoso and songwriter Luca Hart, long-time collaborator Ann Jangle, Queen of African fusion Nhoza, and Phantom of the Opera New York Broadway star Robin Botha. The band enlisted Zulu African Jazz legend Tebogo Mokoena to arrange the brass sections on most of the songs, bringing an epic flavor of South African roots to the album. The title Bounceology was conceived by master Jazz artist Gareth Harvey, the amazing album art was hand illustrated by Elio Moavero.  You can follow Crimson House and stay up-to-date with all upcoming news, tour dates and music via the following links.  You can order Bounceology HERE.  Photo Credit: Paige Fiddes.