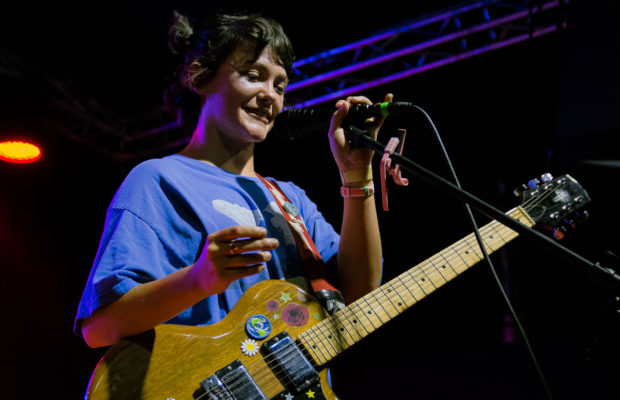 I had the pleasure on seeing Diet Cig for the second time when they stopped in Louisville, Ky on their current tour.  Consisting of Alex Luciano on guitar and vocals and Noah Bowman on drums, Diet Cig is a force to be reckoned with.  Alex bounced onto the stage, clad in a t shirt, black and white checked spandex shorts, tennis shoes, glittery make up and her hair in buns.  She simply glows with joy, exuberance and energy when she performs, whether it’s doing leg kicks, standing on the drums or climbing on top of the speakers. Her and Noah are a great duo, interacting well with each other and feeding off of each other’s energy, as well as that of the crowd.  The venue was filled with a younger crowd, all of whom were die hard fans of Diet Cig.  Alex mentioned being really happy to back in Louisville, that she always feels so welcome at home in when she is here.  Before singing one of the hits off of their latest album, Swear I’m Good At This, Alex designated Diet Cig shows as safe spaces and dedicated the song to everyone in the crowd, whether female, LGBTQ, or anyone who had ever felt ignored, or told that what they had to say didn’t matter, that they didn’t matter.  She shouted that everyone matters, what they have to say matters and that their feelings matter.  She’s an inspirational person with an inspirational message, especially to the younger generation.  It was apparent that the crowd could to relate to what she said, that she was someone they respected and looked up to.  The entire set was filled with Diet Cig’s brand of fun, and at times feminist, energetic pop punk. It was an incredibly enjoying evening!!