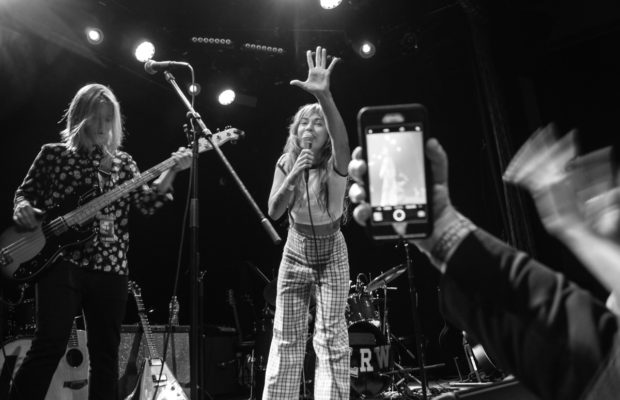 On Tuesday, May 30th, there was something magical in the air in the lower east side of Manhattan—LP was going to be playing to a sold out crowd at the Bowery Ballroom. Fans of hers began lining up hours ahead of doors just to get the opportunity to be as close as possible once she began to sing later that night. Some were seeing her for the first time, while others had just seen her a few weeks back at an intimate invite-only show at The McKittrick Hotel, but no matter what everyone was excited.

Starting off the night was a powerhouse by the name of Lauren Ruth Ward, backed by her band consisting of Eduardo Rivera on guitar, Liv Slingerland on bass, and India Pascucci on drums—Rivera and Slingerland provided backing vocals during her live performance  Her distinct vocal style and songs that delve into a bluesy psychedelic rock and roll vibe with a pop twist had the crowd wanting more.

Next up was Josiah Lemming of Josiah and the Bonnevilles. I had first fallen in love with Lemming’s distinct sound when seeing him audition for American Idol back in 2008 and have been a fan of his ever since. I finally had the opportunity to see him live a few years back at a venue up the road called Rockwood Music Hall and I fell even more in love. Tonight, I finally had the opportunity to see him live once more and he did not disappoint. Armed with just a guitar, a harmonica, and his own voice Lemming’s playing took you to another place whether you wanted to go or not with songs off of his EP Cold Blood.

Finally, it was time for the main star of the night to take the stage. Some had glanced at the set lists upon the stage while others did not want to be told, simply wanting each song sung to be a surprise. LP —Laura Pergolizzi, began the night backed by her band with a powerful rendition of “Muddy Waters” that had the crowd  moving along to the beat, entranced by her presence on stage. Her whistling skills along with her vocals are par to none throughout her live performance— sometimes being in awe that it is even possible. The night consisted of a mix of songs off of her latest album Lost On You along with songs off of her previous albums that had the audience singing along with word for word. If she ever tours near you be sure to go, because you will not be disappointed with her live performance.

Photos and Words by Stefanie Dabaghian