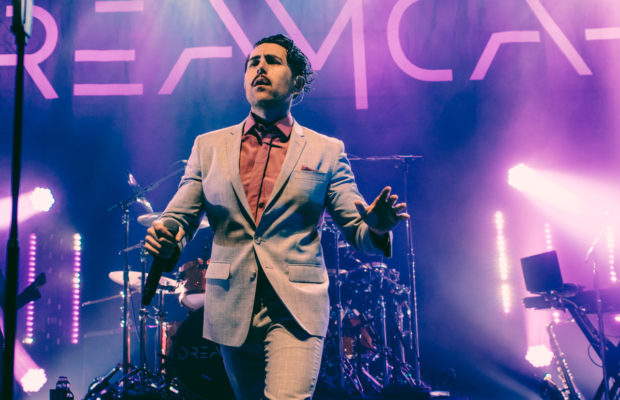 Dreamcar, a new supergroup between AFI frontman Davey Havok and the male members of No Doubt (Tony Kanal, Tom Dumont, and Adrian Young), ended their tour at Chicago’s Vic Theatre this weekend. The band sound like a blend of 80s synth pop and 90s alternative rock, which is quite unexpected for Havok. Dreamcar sounds like neither AFI nor No Doubt, but both bands are clearly represented in this solid collaboration.

Havok is typically known for his operetta-style vocals, black-as-night attire, and goth appearance. For this new project, however, he’s ditched all but his signature sound and now dons bright, tailored suits and a John Waters-style moustache. The band released their self-titled debut album just weeks before playing in Chicago, yet most of the audience on Saturday night knew every word to their songs.

Before Dreamcar took to the stage, synth-pop group Superet warmed up the crowd with their catchy, energetic songs. The group are still relatively unknown, but their set resonated with a lot of people in the audience. Encouraging people to clap, dance, and be chaotic, Superet ensured that their name was on the tip of everyone’s tongue before the main event.

For those who know Davey Havok, it will come as no surprise that he remains an enigmatic frontman. His vocals on the band’s single, “Kill for Candy”, complemented Kanal’s poppy bass line perfectly. While Dreamcar failed to sell out The Vic, those who were in attendance were all but giddy at the sight of their favorite rock stars. Both AFI and No Doubt fans came together (something that would likely not happen otherwise) to appreciate this new group.

The album is far from perfect (sometimes sounding a little too radio-friendly for either band), but it’s a refreshing and enjoyable record. Whether or not Dreamcar remain a long-lasting supergroup remains to be seen. Gwen Stefani has expressed concern on the future of No Doubt, but AFI released a new album six months ago and is still going strong. Nevertheless, what Dreamcar have put out is fun and will certainly keep us wondering what they’ll do next.