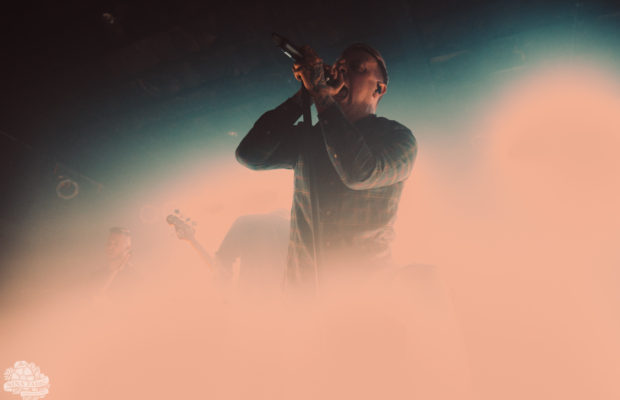 Stray From The Path

After a long and sorrowful 2016, Architects has headed back out and is continuing to tour in support of their most recent release, All Our Gods Have Abandoned Us. After losing guitarist Tom Searle to cancer last August, the band took a brief break before going right back to the stage, touring in Searle’s memory. Their first time back in the US since losing Tom, Architects is currently on a run with Stray From the Path (US) and Make Them Suffer (AUS). Wednesday night, they hit up Bottom Lounge in Chicago for the second night of tour.

Bottom Lounge is a cozy little hole in the wall on Lake Street, and on most nights it’s no surprise to see a crowd lined up starting a few hours prior to a show. On Wednesday night, there was most definitely an early line to get into Architects’ performance (which did in fact sell out). With doors promptly at seven and a crowd lined up down the block, the venue was packed full by 7:30 or so.

The first opener, Make Them Suffer, fit right in among Architects’ fans. Though they are not widely known in the States, this metalcore outfit from Perth knew how to perform and warm up the crowd. In the handful of songs they performed, they had a great stage-presence and some awesome riffs.

The next band on the bill, Stray from the Path, definitely had the crowd rocking. A metalcore/hardcore band from Long Island, these guys always know how to put on a good show. All of their tracks are very vocal about the views, and are very political. Vocalist Drew York, during their set, even took a moment to point out that as musicians, they have a platform that they should be using to educate people – and they did. Performing tracks like “Badge & A Bullet” (both parts I and II) about police brutality and corruption, and some fan favorites, like “D.I.E.P.I.G.” (about musicians preying on young girls and women), and “First World Problem Child” (about the selfishness caused by being privileged and ungrateful). Stray always makes their opinions clear in their lyrics, and they also get the crowd fired up at the same time. They did a great job of keeping the show fun and keeping it moving, while also gearing everyone up for Architects’ set.

Architects, the men of the hour, were up next. This band has a stage presence that, in combination with an incredible light show, captivated the crowd for well over an hour. From the second they went on, the crowd was into every single song, moving and yelling and enjoying every second of it. Vocalist Sam Carter was so into every growl, and the rest of the band were so captivated by their parts as well. They played a fifteen song long set, with fan favorites “Nihilist” opening and “Naysayer” closing – and a two song encore, featuring “A Match Made In Heaven” and “Gone With The Wind.” The crowd was obsessed, and had an incredible time, giving their full attention to every track. Drummer Dan Searle even took to Twitter later, saying “For the first time ever, it really feels like the US is on board with Architects.” Needless to say, it was a show to remember, and a tour definitely worth catching.