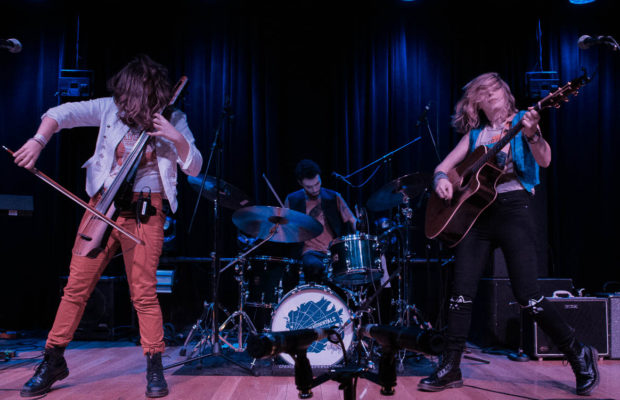 The Accidentals with Jake Allen

Michigan indie-folk band The Accidentals, currently on tour following the release of their latest album Odyssey, made a stop recently in Louisville, Ky.  Singers and multi-instrumentalists Savannah Buist and Katie Larson and drummer Michael Dause put on an incredible show to a packed venue.  Zanzabar is a small venue, which gave the concert a nice, intimate feel.  Larson, Buist and Dause have a great rapport and laughed and interacted with each other throughout their set.  They are all incredibly talented musicians, with Larson describing her and Buist as orch-dorks (orchestra dorks) as they were in orchestra together in high school.  They had plenty of interaction with the crowd, as well.  At one point Larson joked with the crowd that they picked an unfortunate band name, as their van had broken down several times.  Between songs, the band chatted with the crowd on a variety of topics, such as the making of their most recent music video, the meanings behind some of their songs, and the lessons they’ve learned about being a band and essentially running a small business since they formed as a band.  Before performing their song The Sound A Watch Makes When Enveloped In Cotton, Larson explained how she was terrible at making decisions and was having a hard time naming the song.  She picked a random line out of a book of short stories and used that as the song title.  She offered a free vinyl copy of the new album to anyone who could tell her after the show the name of the short story, joking that no one was allowed to cheat by googling the answer!  The great thing about watching Larson, Buist and Dause perform is seeing how much fun they have on stage and how much passion they have for playing.  They played a nice selection of songs and kept the crowd engaged for the entirety of their set, with their beautiful harmonies and wonderful performances on a variety of instruments.  Larson alternated between the guitar and electric cello while Buist alternated between the guitar, bass and violin.  It is easy to see why The Accidentals have wowed audiences and the industry alike.  They put on a fun and energetic show and are genuinely grateful for the chance to do what they love-perfroming their music live!  I expect that they will keep gaining popularity and new fans going forward!  Opening the show was fellow Michigan musician Jake Allen.  He also played guitar and keys with the band during their set!