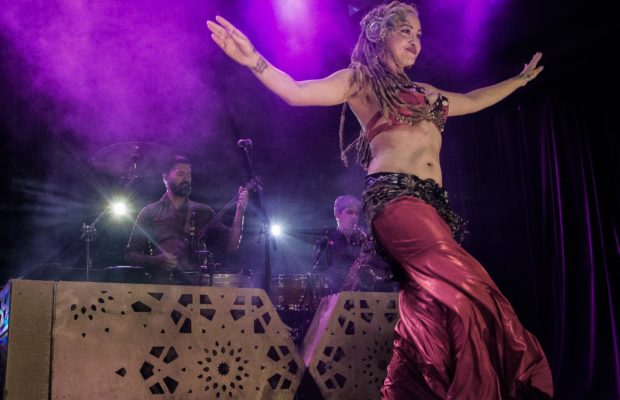 Beats Antique, who are currently on tour in support of their latest album Shadowbox, made a stop recently in Louisville, Ky. With a mix of experimental world fusion and electronic music, the band combine tribal fusion dance with performance art. The stage was set up beautifully, with metal props set up around the stage, with intricate designs carved out of them which allowed light to shine through beautifully. All instrumentation was set up towards the back of the stage, allowing for the front to be used for Zoe Jakes and her dancing partner to make full use of. Whether it’s hip-hop, Gypsy, Moroccan, Indian or any number of world music influences that makes their way into the music, Beats Antique covers a wide array of sounds. Jakes, whether solo or with her dancing partner, delighted the audience with a wide variety of dancing, using such props as a genie bottle, a beautifully intricate sphere that radiated light or a drum strapped to her chest, she captivated the crowd with her amazing belly dancing and drum playing! During a couple of the songs, she and her dancing partner both played free standing drums while mixing in some dancing, as well. They also came out with pom poms for a couple of songs, and performed as cheerleaders! Throughout the evening the band would perform some songs solo, while during others Jakes and her dancing partner would come out on stage and perform with the band, adding to the enchantment of the evening. During the encore, Jakes pulled a member of the audience to the stage to have her be part of the next act, which included a giant blow up monster of which they both cowered in fear! This part of the show had a very vaudeville feel to it. For the final song, Jakes sat at the very edge of the stage, with her drum attached to her chest, and performed directly to the audience. Her cheerleaders, donning cat, wolf and giraffe masks cheered behind her, sharing the stage as well with the large blow up monster. It was an incredibly magical and wonderful evening of captivating music, dancing and performance art, which left the audience buzzing with positive energy. Beats Antique put on a great live show for their fans, ensuring a great time was had by all!