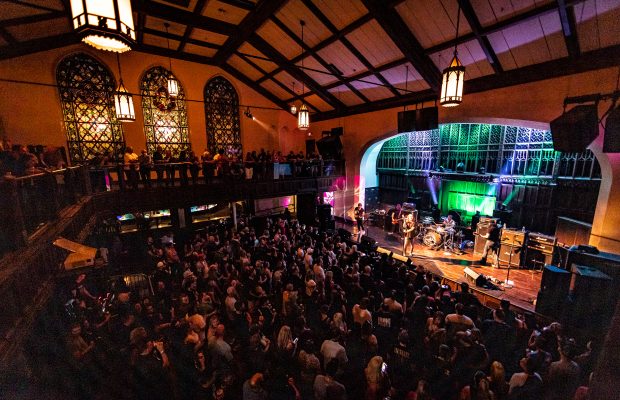 Candlebox headlined The Bluestone in Columbus Thursday night with local support from RADATTACK.  Candlebox was in town to continue the 25th-anniversary celebration of their four-times platinum, self-titled debut album.   The Bluestone, a converted church, was filled with fans all over the age spectrum ready to rock out.

RADATTACK, self-described as a “new crop, Rock and Roll Muscle Pop” band opened the show and got the attention of the audience.  One of those audience members was Candlebox’s Kevin Martin. Kevin caught half the set from the pulpit on the side of the stage. He was so impressed that he shared a clip of RADATTACK’s set on the Candlebox’s official Facebook page, calling them “the future of rock and roll.”   The four-piece band headed by Henry Velour, owned their unique sound but had familiar undertones and stylings of classic rock with a modern twist. Their forty-minute set consisted of original songs that had music lovers impressed and wanting to hear more from this young talent. Their music is available on Spotify and at RADATTACK.com

Candlebox came on stage after 9 pm and opened the show with Don’t You, a high-energy, crowd favorite that got the crowd going.  It was evident the current line up are good friends on and off the stage by their stage presence and overall musical dynamic. The show consisted of all the songs from the debut album, with music from their other albums sprinkled in during their hour and forty-minute set.  Blossom “a song for all the ladies out there,” had the entire venue singing. Playing acoustic guitar with the band for He Calls Home was Sean “Memphis” Hennesy, a former member and current guitar tech for the band.

Taking a break from the debut album partway through the set, fans were treated to a timeline of songs from the band’s catalog of albums.   The Happy Pills album was represented by Sometimes, a song Kevin wrote about a stripper ex-girlfriend. Also included was Alive at Last, a track off of their 2016 release, Disappearing in Airports.  Kevin dedicated the song to all the friends he has known and did not get to say goodbye to.

Kevin continued to express his love throughout the set of his love of the state of Ohio and its production of amazing music,  He later introduced his band members, joking they were all from various cities in Ohio except for Brian Quinn, who is from the Philadelphia.

The show closed out with the band’s two well-known singles, You and Far Behind. then followed by Rain, a fan favorite.  The song You, Kevin joked “contains his favorite word.” The Bluestone erupted when the band started the familiar guitar riffs that begin the song.  Joining the band on stage for Far Behind, a song written about the death of Seattle musician Andy Wood, was Zach Meyers of Shinedown on acoustic guitar. The show concluded with the track Rain, leaving many fans wanting more from the talented group of musicians.

For a complete list of upcoming shows, visit www.candleboxrocks.com.