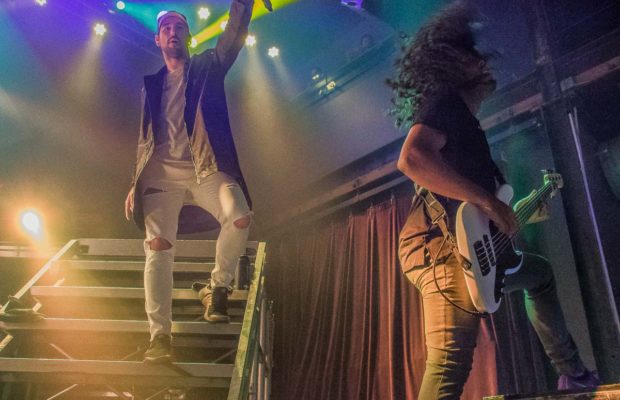 Issues with Volumes, Too Close To Touch and Sylar

Issues brought their Headspace tour to Louisville, Ky recently for a nearly sold out show, performing to packed venue of diehard fans.  The band played a high-energy and engaging set, interacting often with the crowd.  The stage set up was such that there were short platforms at the front of the stage, a very tall platform for the drum kit towards the back of the stage and stairs on both sides of the drum platform leading up to the top.  The sides of the drum platform had screens, which lit up with different colorful patterns or the band’s name throughout the set.  Singers Tyler Carter and Michael Bohn, bassist Skylar Accord and guitarist AJ Rebollo took turn on the platforms, playing and singing to the crowd.  The band kept their fans hands in the air for most of the evening, with Tyler even instigating a circle pit, telling the crowd “It’s easy.  You just run around in a circle!”.  The fan’s energy definitely matched the band’s, as they sang along to every song, danced, moshed and crowd surfed for the entire set!  Before getting too far into their set, Tyler asked to take a picture with the crowd, before the band got tired, sweaty and gross!  About halfway through the set, Tyler had the singer for Sylar come out for a song!

Issues are super appreciative of their fans.  At one point during their set, Tyler mentioned how the Louisville show was their smallest of the tour, in terms of number of attendees, but how that band was really appreciative of how many people came out for the show.  He said he’s pleasantly surprised by how dedicated the fan base continues to be and by how much it keeps growing.  Tyler later mentioned that this night marked 9 years since his best friend had died from a car crash involving a drunk driver, before launching into “Disappear”.  The band ended their set with I Always Knew > Slow Me Down, leaving the stage to a roar of cheers and applause.  With the crowd chanting “Issues Issues Issues”, it wasn’t long before the band came back out for a two song encore.  They started out with “Mad At Myself” and ended the show with “Hooligans”, during which Tyler had a portable fog machine strapped to his back , shooting fog into the crowd.  Issues is a really incredible live band, putting on a really fun and energetic show.  They left their fans buzzing from an amazing performance of what I am sure is many of the fans favorite band.

Life Of A 9 > The Langdon House

Hero > The Worst Of Them

I Always Knew > Slow Me Down