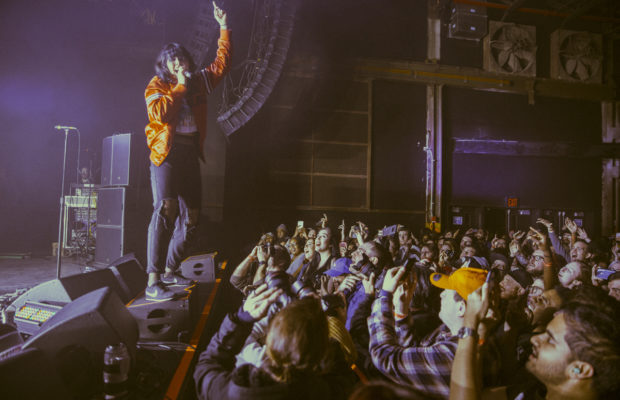 There are very few bands, at least for me, that I listed to and become physically incapable of not dancing to their songs. Sleigh Bells is one of those bands. The band, consisting of Derek Miller and Alexis Krauss, was born out of a contrasting attraction to the sounds of heavy metal and pop music. The duo paired their respective love, for Miller it was heavy metal and for Krauss it was pop, and have been making music unlike anything I’ve ever heard for over a decade.

After releasing their fourth studio album Jessica Rabbit (the first on their newly born record label Torn Clean) as well as an EP titled Kid Kruschev last month, Sleigh Bells announced a tour where they would be bringing their noise pop across the country. Last night, the tour landed in their home city of Brooklyn, New York, where they played to a nearly sold out crowd at Brooklyn Steel. Fellow New York City natives, Sunflower Bean kicked off the show where they played fan favorites like “I Was Home” as well as new songs “I Was A Fool” and “22”.

The venue was become more packed with each passing moment as it inched closer to 10pm, when Sleigh Bells would take the stage. Finally, it was time and the lights when dark. On the stage sat the banners from the Bitter Rivals era, the left read “keep Faith” and the right “Loyalty”. The band opened their set with one of their newest songs “Blue Trash Mattress Fire”, before blending seamlessly into “Riot Rhythm”. For those who had never seen Sleigh Bells live before, they were in for a treat. After recovering from an illness, Krauss sounded better than ever and the light show that the band puts on is one for the books.

Sleigh Bells played a lengthy set and the energy the emanated from the members on stage never dipped below full throttle for one moment throughout the show. The amount of running around that Krauss does, combined with her ability to belt out the high notes in songs like “I Can Only Stare” and “Bitter Rivals”, is extremely commendable. Sleigh Bells concluded their set with the hit “Crown On The Ground”, which got everyone in the venue off their feet. But don’t be mistaken, Sleigh Bells returned to the stage after a brief moment to play their encore, which included what can easily be deemed as their heaviest song “A/B Machines” as well as “Rill Rill”. The night had come to an end and looking around, there was sweat dripping from peoples faces as we turned to exit the venue. That show is surely going to be one to remember.