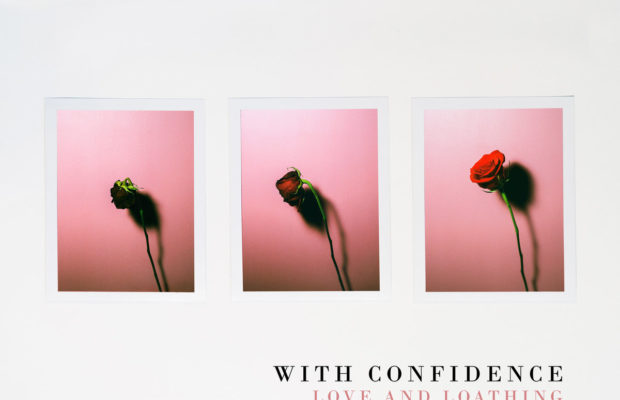 Australian pop punk outfit With Confidence (vocalist/bassist Jayden Seeley, guitarist Inigo Del Carmen, and drummer Joshua Brozzesi) have returned from a brief respite from touring with not only a spot on the 2018 Vans Warped Tour, but with a brand new 12-track album Love and Loathing. This is certainly a true blue pop punk record, sticking to its guns with telltale catchy choruses and guitar riffs that will certainly be stuck in the heads of fans for a good while.

Lead single and opening track “That Something” totes edgy pop rock sensibilities with an optimistic message/hook that will get any crowd moving and singing along. Seeley’s solid bass work in tandem with some headbanging guitar riffs from Del Carmen make for a very effective, attention-getting first track, setting the album’s tone. “Sing To Me” kicks the energy level down a notch, but its anthemic chorus and relaxed vibes (as far as pop punk is considered) is sure to make it a lovable track for any pop punk fan.

Tracks like the fast-paced “Jaded” provide some good old-fashioned punk flavor to the album, the guitar riff-heavy “Icarus” holds some interesting hard rock influence, and the band goes for a very cool acoustic-driven change of pace with “Bruise” and “Paquerette (Without Me)” in succession. Outside of these tracks, if there’s one qualm to be had about the album, it’s that one could say it sticks to its guns a little too tightly; many songs stick to an “if it ain’t broke, don’t fix it” philosophy as it comes to pop punk. There are enough tracks on the album to provide a unique counterbalance, though, so whether or not the aforementioned “true blue pop punk” tracks deter listeners is entirely subjective.

Love and Loathing concludes with the mellow, sing along-friendly “Tails”, providing an impactful end to the album, and a brief acoustic section with the mantra of “I think love and loathing’s all I’ve got, sometimes I think it’s all I want”. From the positive outlook of tracks like “That Something” to the somber-themed tracks like “Tails” or “Bruise”, there’s a song for avid pop punk lovers of all backgrounds and tastes. While the envelope wasn’t notably pushed with Love and Loathing, it still makes for a fun listen, and a great addition to anyone’s end-of-summer playlist.