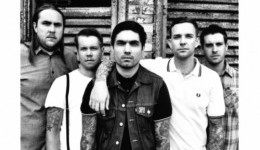 I Am The Avalanche, a punk rock band from Brooklyn, New York, released their latest album, Avalanche United, on October 11, 2011. Despite multiple tours, a long gap between releases, and an opening gig for Paramore in Puerto Rico, this is only the band’s second full length recording.

The opening song, “Holy Fuck” is interesting. The lyrics and tune seem to be more enjoyable than the lead singer, Vinnie Caruana’s actual voice. It’s like a cross between singing and screaming. Hmm, maybe we have created a new hybrid of singing style here. It’s hard to see what he’s trying to get at, but the harsh, raspy sounds of his voice are at times a little too much. Just a little overdone. Yet, the catchy “whoa”s and guitar riffs save and support the oddness of the vocals.

Then, as the album goes on, it’s clear that all the songs are like this; that this is just their unique style in which they make their music. Aside from that one issue, it’s clear that I Am The Avalanche is capable of turning familiar places and objects such as the Brooklyn Dodgers and Amsterdam into fun, but slightly angsty pop songs. When the album reaches the song, “Is This Really Happening?” it demonstrates a more of boy-band sound, resembling something along the lines of a Simple Plan song. Another track that’s note worthy is “You’ve Got Spiders,” which has a nice, comforting sound to it, especially when the “You’ve got spiders,” line comes around.

Avalanche United creates images of dark colored, flashing lights and loud amps. Listening to the album will immediately make one feel as if their intensely moshing in   crowd of sweaty teenagers. Look out for the crowd-surfer above! “Gratitude,” the finishing song, starts off with a unique guitar riff, but then returns to the same sort of sound that had been displayed throughout the album. Just like a concert, the album ends with some enthusiastic chanting, but instead of “One more song!” one hears “Avalanche united,” recited several times. The closing of the Avalanche United truly has a sense of an ending to a hard rocking concert.