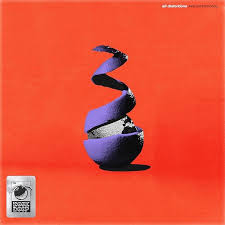 Neck Deep have reemerged into music in recent weeks with the aptly titled All Distortions Are Intentional, and they sure have grown up. While Pop-Punk is forever young, the Pop-Punker’s themselves are not. Identifying with a mature sound, it is a far cry from their aggressive roots that propelled them to where they are today.

While you can parlay opinions back and forth on whether or not this is “Pop-Punk” You cannot deny Neck Deep their credit, Pursuing a new sound,  Coming off of the 20th anniversary of EOTS with Blink-182 last summer, it would have been widely accepted by the entire music community to pursue another version of The Peace And The Panic. Don’t get me wrong, this album begins with some Generic pop Punk of its finest, but it has a polished feel that doesn’t bite the same way Kali Ma, Or Cant Kick Up The Roots

Sonderland is our introduction to what becomes a carefully crafted subconscious novel.  not dictated to us but,  instead painted in our own imaginations. With poppy expulsions, and warm base undertones. Dani Washington’s dynamic drums carry Ben Barlow’s voice into what feels to be the most Angst filled track of the album.

Fall, Lowlife, and Telling Stories to continue with a similar vibe, very clean, very well balanced. I’m sure this direction was heavily influenced by the band’s decision to work with Matt Squire. His more notable artists being Arianna Grande, and One Direction.

Our carefully crafted novel reaches a very warm place with When You Know. With the world around our subliminal characters deemed to be in chaos. the inward focus on the relationship with that someone.

the album switches gears for a darker turn with Quarry. A depressive track that carries through the monotonous rhythms of a darker time in life, and carrying the proverbial movie in our heads down a dark road, Sick Joke spews frustrated lyrics over the same consistent polished instrumentals.

Little Dove brings a sense of restitution delivering a feeling of what would be the end of a long quarrel of some sort sensibility wise. The Album ultimately concludes with Pushing Daisies following suit delivering the same feeling.

If you found yourself disappointed by this album because it’s not “Neck Deep” instead take the perspective that it is removed from the band in their classical stance, but instead view it as an experimental side project which is still heavily influenced by its main genre of music. This album gets an A+ from me, as many still facing uncertain times, and unaware of what the future holds, this album will lead you on a journey mentally, carefully molded to showcase a full spectrum of introspective emotions.