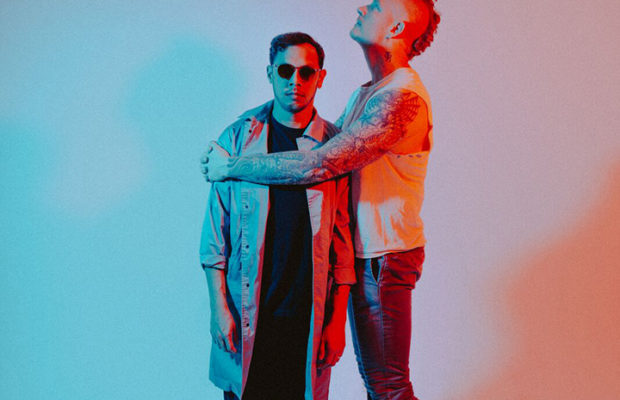 FITNESS, the alternative electronic duo comprised of ex-AWOLNATION keyboardist Kenny Carkeet and Eve 6 vocalist Max Collins, is creating a buzz since their formation.  The two met in 2012 while watching Public Enemy together at a radio festival that they were playing with their respective bands and decided to keep in touch.  They later discovered that they were both seeking a new creative outlet and decided to join forces to form FITNESS.  The two met in LA and wrote some songs together and found themselves having real fun playing music again.  With a combination of alt rock melodies and aggressive synth pop, Carkeet and Collins have created a sound that’s unique to them and are allowing their creativity to lead the way.  They are writing and recording music for no one but themselves and with no constraints on their creativity or the industry telling them what to do to ‘succeed’.  They released their debut EP Aggroculture in 2017 and in June of this year their debut full-length album Karate was released.  Carkeet and Collins just want to bring back the fun to playing music and hope their fans will come along for the ride!  Staff writer Emily May spoke by email recently with Carkeet about the new album, what excites him and Collins about the band and what’s next for them.  You can stay up-to-date with the band and all upcoming tour information on their website, Facebook, Twitter and Instagram.  You can stream their music on Spotify and check out their videos on YouTube. You can purchase their music on iTunes and from their website store. You can check out their video below for “Matter Of Time” from Karate.

You released your debut album, Karate, on June 29th. I read that you wrote, recorded and produced the album yourselves. What was that process like and how did it differ from the making of your 2017 EP Aggroculture? Currently being on tour, what has the response been to the new album live?

Post AGGROCULTURE we had developed more of a sense of what we were as a band. KARATE still spans genres and has different production elements song to song, but there’s a continuity that we hadn’t yet discovered when we made AGGROCULTURE. The response has been… people fucking love it.

With FITNESS, you two are doing things that excite you. What excites you both the most with this musical endeavor?

Not having any constraints on our creativity. Not having any outside forces or ‘peanut gallery’ impede our process. Being able to follow our whimsy wherever it may take us.

What was it about “Feel The Weight” that made you realize who you were as a band and what you naturally sound like?

We were still in the process of self-discovery when we made “Feel The Weight,” but i do think that song encapsulates FITNESS’s toxic masculinity and femininity.

You have talked about how, as a fan of music, you look for honesty in music and that’s all you look for. Do you feel that is becoming more rare in the industry these days? Who are some artists you are listening to right now that reflect that honesty?

I think there will always be a mix of honest and dishonest bands. As a songwriter for hire, I see all too often bands and artists who are trying to replicate something they love. We will ALWAYS be inspired by great songs, but sometimes songwriting is treated like assembling a puzzle from already existing pieces. There are plenty of honest bands out there… some I listen to are ALT-J, BROCKHAMPTON, Childish Gambino, Kendrick, Bear Hands, Gorillaz, etc etc.

I read that you guys ended up changing songs on the album a number of times before it’s release. What prompted the changes and how did you both decide which songs would make the album and which ones would not?

It was clear to us by the end of the writing process, which when right up to a couple weeks before the release what songs rose to the top. The criteria was what songs make us feel the most.

You are both songwriters for hire. How do you balance your time between writing songs for others and writing songs for FITNESS? Has your focus shifted more towards the band or have you been able to do both without too much of a challenge?

We are always working. Anytime we don’t have a client in the room we are working on FITNESS. And even when we do, after hours and before hours, we work on FITNESS. The band is definitely our primary focus but we still enjoy playing nicely with others from time to time.

You have said that honesty has left the table for music and that everything right now is so fabricated, formulated and analytical. FITNESS, in a sense, challenges the status quo in the industry, as you both do things how you want rather than how the industry would have you do things. With fans gravitating towards your “I don’t care” attitude, why do you two feel that you have been successful in the face of “bucking the system”?

I think it all comes down to honesty. Everything FITNESS is purely from the dumb brains of Max and myself. How we act on stage, conduct ourselves in interviews…. its all in the moment. Too many artists take themselves way too fucking seriously. Be dumb, have fun… just be yourself.

You have stated that a lot of bands start out genuine, making music they believe in and then get put into the machine and commercialized. Do you two feel like more artists will follow FITNESS’s band model?

I can’t speak for any other band, just from my own experiences. I see so many bands being creatively nitpicked from all directions… and that band will give in to any and everything they are told they need to do to ‘succeed.’

I read where you had to re-learn, with FITNESS, how to give yourselves permission to write without concern for whether the song had commercial appeal. What was that process like? Did it take a while to break the habit of writing commercial hits or was it a short process?

It involves putting aside analysis and operating on instinct, going by feel as opposed to some convoluted intellectual pursuit.

You are currently touring with Wild Moccasins. What else do you have coming up? What’s next for you?

We have a lot of fly dates starting to line up and another tour soon to be announced : ). I’m sure before long, Max and I will have written more songs that we can’t wait to share with everyone.