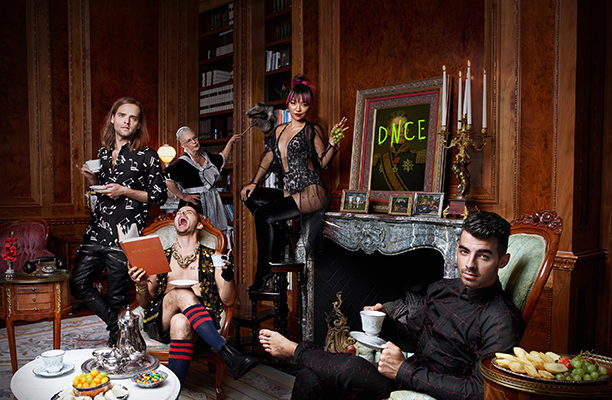 Former Jonas Brothers frontman, Joe Jonas, has shed his factory produced Disney exterior and embraced the weirdo funk pop persona of his new band DNCE. The pop band unleashed their double platinum hit “Cake By The Ocean” off their debut EP, Swaay, last year and have now delivered fans with their self-titled debut album. The album serves to find a sophisticated balance between classic pop sounds and funky guitar riffs.

The band is made up of Jonas himself, guitar goddess JinJoo Lee, master of upbeat percussion Jack Lawless, and Cole Whittle, who helps the band standout with his groovy basslines and attention-grabbing style. The party that is DNCE opens with the title track, in which Jonas creeps into the listener’s ear chanting “DNCE” in a high pitched voice. The tune then slams into a smooth jazz infused pop beat and becomes a total hip shaker. As the album opener, it is imperative that the song pan out what the remainder of the album is to be like, and “DNCE” does just that.

The album does put the brakes on for one moment, continuously pumping forward at full speed ahead. “Doctor You” is yet another classic DNCE song, filled with funky tunes. The song opens with a heavy bass line that pulses through your veins before unleashing into an ear worm chorus in which Joe Jonas serenades the listener.

By incorporating Florida-based rapper Kent Jones into “Blown”, DNCE shows a bridge between musical genres, an imperative move if they are planning for an extended stay in the pop music industry. The song opens with 50s era tunes that sound straight out of the high school dance scene in Back To The Future. Jonas shows that he has mastered vocal pacing throughout the album, by using unique pacing and tone to create a funky atmosphere in each song.

The confetti party that is DNCE begins to settle down momentarily during “Almost”, in which Joe serenades the listener while Lee finger picks the melody. After a brief moment of calmness in the middle of the album, the band picks things right back up where they left off.

“Be Mean” opens with a fade in guitar intro before dropping into a soulful R&B beat that plays behind Jonas’ diverse vocal range where he sings from his lower to his upper register in a matter of seconds. The album concludes with “Unsweet”, a head bumping pop anthem in which Jonas talks about liking a girl who is “Unsweet, don’t need no manners, don’t need the good, the good, grammar when you pour your heart out on me”.

DNCE delivered a powerhouse 14-song debut album. Like many of his fellow Disney stars, Jonas proves that he has shed his fabricated innocent exterior and has embraced his new sexy playfulness throughout this album. If the aesthetic of DNCE had a sound, it would be their entire debut album. From the funky haircuts, to bold fashion statements to the overall chill aesthetic, everything translates into this debut album. Despite just arriving onto the scene last year, DNCE has shown the pop music industry that there is a new path to take and they’re the leaders.