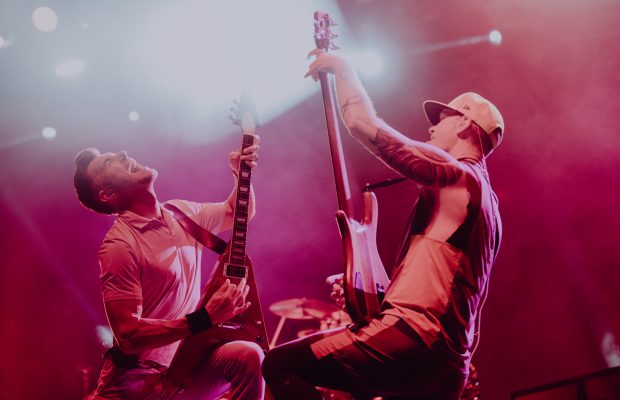 311 with The Dirty Heads, The Interrupters, Dreamers and Bikini Trill

On August 7, 2019, 311 and Dirty Heads co-headlined Austin360 Amphitheatre in Austin, TX. A unique venue situated on a Grand Prix race track, this venue is an experience in and of itself even without the show. It was a scorching summer’s day, and in the hottest part of the day, fans braved the heat to witness this incredible five band bill. The show opened with Texas native band Bikini Trill, whose parents were actually in the audience. Bikini Trill, a band who has worked with Jared Watson of Dirty Heads, played songs from their new EP “Nah, pull over!”, which was released at the end of June, as well as some of their more popular songs that are creeping up on 100k Spotify plays. The band exudes tons of energy, despite the heat and difficult set time of 5:45 PM, and they got the crowd pumped for the 4 following bands.

Next, DREAMERS, an alternative-pop-rock trio from New York took the stage. The band played through some of their biggest hits that are recognizable from radio play and performed some tracks from their newest album as well, which was released in April of this year. The catchy melodies of “Sweet Disaster” and “Die Happy” definitely left the crowd humming their tunes the rest of the night. The Interrupters, a ska punk band from California, took the stage in the middle of this festival-esque lineup. Never have I seen an opening band with as much energy and performance quality as The Interrupters. Starting the show with bangers like “A Friend Like Me” and “White Noise,” this band captured the attention of the audience and made many new fans that night. Fronted by Aimee Allen, the band led the crowd in a protest song, “Take Back The Power,” in which Aimee spent most of the song interacting with the crowd. The middle of their set featured a cover of Billie Eilish’s “bad guy,” which had the whole amphitheatre dancing. The band closed with alternative radio hit “She’s Kerosene,” and left the crowd wanting more.

The first headliner, Dirty Heads, took the stage around 8:00 PM, leading with a rhythm section instrumental introduction featuring percussionist Jon Olazabal, drummer Matt Ochoa, and keyboard player Shawn Hagood. This intro turned into catchy hit “Burn Slow” from Dirty Heads 2014 album Sound of Change. Taking the stage by storm, Jared Watson and Dustin “Duddy” Bushnell rapped and sang their way through hits from their entire discography including “Cabin By The Sea,” “Lay Me Down,” “Red Lights,” “Mad At It,” and performed songs from their album that would release two days later, including the title track “Super Moon.” The band’s production included an elevated riser on which Olazabal, Ochoa, and Hagood performed on top of that doubled as a video screen, adding extra elements to the already high energy performance. The band closed with hits “Oxygen” and “Vacation,” and then left the stage to a high energy remix of “Oxygen” which left the crowd dancing even between sets while the crew prepped for 311.

After four bands, 311 finally took the stage after a video countdown that was accompanied by the chants of fans all around the amphitheatre yelling “Three! Eleven! Three three eleven!” until they saw the five men take their instruments. The band opened with hit “Beautiful Disaster” from their 1997 album Transistor, and the crowd went wild. They continued to play some of their greatest hits including “All Mixed Up” and “Amber.” However, the band had just released their thirteenth studio album, Voyager, on July 12. The set included five songs from the new album, including funk masterpiece “What The?!” and Electric Light Orchestra reminiscent jam “Better Space.” The production of 311’s set has stepped up every single summer that they have toured, and this tour featured three LED video screens that created a spacey and ethereal environment around the band’s songs preaching messages of positivity and unity. As always, the highlight of the show was the drum solo from drummer Chad Sexton, in the middle of “Applied Science.” Sexton has incorporated new, electronic sounds into his classic grassroots drumming that is immediately recognizable by his snare tone. The band then joined him in this drum solo and did a whole percussion routine complete with throwing sticks to each other, all before finishing the song. The show closed with the song that changed everything for the band, “Down.” Here they are, celebrating their 29th year as a band with no line-up changes and no hiatuses, performing to a crowd of people who have all been impacted by their music in one way or another over the past nearly 30 years.